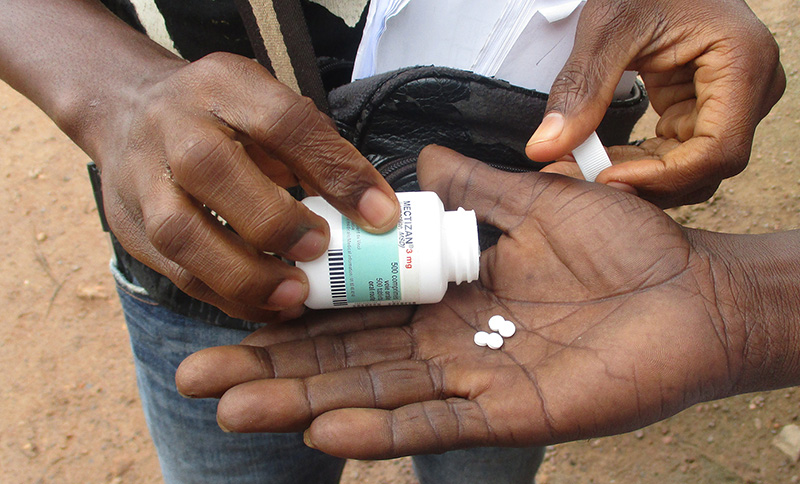 from 3-9 April 2022. Bilharzia and intestinal worms are two of the neglected tropical diseases (NTDs) prevalent in Zimbabwe targeted for elimination by year 2030.

The Ministry of Health and Child Care (MoHCC), with support from Higher Life Foundation and World Health Organization (WHO), carried a seven-day mass treatment campaign from 3-9 April, in 43 districts to reduce the burden of bilharzia and intestinal worms in these areas.

The treatment campaign targeted children between 5-15 years, with adults in high burdened districts encouraged to take part. In some provinces like Mashonaland East, the campaign also provided routine immunisation services, COVID-19 vaccination, as well as Vitamin A supplementation and malaria treatment.

“My children had to be part of this because it helps them. I now know they are protected from bilharzia and intestinal worms,” said Salome Munoti, a mother of two boys who received their tablets during the campaign in Chegutu, Mashonaland West.

“We have experienced many outbreaks in Chegutu including cholera and these mass-campaign initiatives have always benefitted us and our children.”

Zimbabwe has made significant progress in reducing the burden of neglected tropical diseases (NTDs) such as bilharzia, intestinal worms and trachoma through regular mass drug administrations.

Although the country has not yet eliminated these diseases completely, the impact assessment results of 2019 shows that the prevalence of these NTDs have been reduced by 80% and fewer districts will be needing MDAs each year going forward.

“The country has been implementing mass treatments for Bilharzia since 2012 targeting pre-school and school age children but also we target adults in districts where these diseases are prevalent,” noted Ministry of Health and Child Care (MoHCC) Epidemiology and Disease Control Acting Director, Dr Isaac Phiri.

“We embarked on this year’s mass treatments in 43 districts which still remain endemic for bilharzia but at low intensity, with an average prevalence having gone down from 22% to 5 % thanks to measures put in place to reduce the burden of the disease,” he added.

Higher Life Foundation, who have taken the lead partner support in the implementation of MDAs for bilharzia and intestinal worms over the years, provided the financial resources for the training as well as implementation apart from the technical support provided throughout the exercise.

The campaign was also supported by medicines donated to the Ministry of Health and Child Care through WHO. In addition, WHO also provided technical support to ensure smooth implementation of the campaign.

“We believe that our role in society is help people express themselves and when children are affected by these tropical diseases they won’t be able to do that,” said Dr Kennedy Mubaiwa, Higher Life Foundation Chief Executive Officer.

“Ensuring that children, in particular, have received the right interventions such as these MDAs will help them participate fully, which is one of the goal of the Foundation.

“By them being called NTDs, it means these diseases are not being prioritized even during budget allocations, so we are also supporting a set of diseases we know does not usually get financial support.”

The first four are also the diseases amenable to control and elimination through intermittent mass treatments.

“MDAs for NTDs are essential to reduce transmission levels for NTDs, to a level where they become less of a public health problem. This is done through intermittent treatment of everyone in high-risk areas to reduce amount of disease thereby reducing transmission,” said Dr Anderson Chimusoro, WHO Focal Point for NTDs.

“We applaud the strong leadership of MoHCC and the high level of support of philanthropic organizations such as the Higher Life Foundation in this important public health intervention. We hope we will be seeing even more collaborations from the private sector and other local NGOs in the effort to eliminate NTDs in Zimbabwe,” he said.