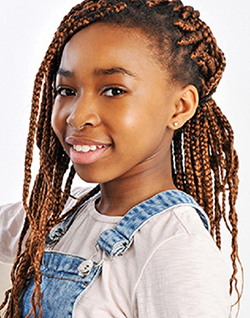 UK: Twelve-year-old Zimbabwean actress, Hazel Cheuka, has reached the finals of the Teen Star competition, the UK’s only singing and dancing competition for teens and pre-teens.
The talented Hazel, who lives with her mother Lungile Mlotshwa in Aylesbury, Birmingham, beat thousands other contestants at local and regional level and will compete at the national level on April 30 where she will be among the first group of dancers the competition has opened its doors to.
“The TeenStar competition has three age categories – ‘Late Teens’ (16-19), ‘Mid Teens’ (13-15) and a special category searching for the stars of tomorrow, the Pre-Teens! All types of singers and dancers are invited to enter TeenStar” the organisers said in statement.
The multi-talented Hazel, who is into acting, singing, dancing and modelling, was spotted by her school teachers at the age of ten and focuses mainly on acting.
She is currently working with Harry Potter and other companies that work with talented teen stars from diverse backgrounds.
“Hazel was in the Annie production and has had to pull out due to the upcoming national TeenStar competition.  Currently, Hazel is with Adele performing arts and coaching as she prepares for the highly challenging national TeenStar competitions.”
Hazel, who will be starting her Year 9 at Tring Park Performing Arts school, Come September this year, had just auditioned at the Disney Club School where she got an offer for acting when she was spotted.
“Hazel has always been the charismatic young actress who catches every judge’s attention. Previous winners of this competition include Luke Friend and Emily Middlemas,” reads the organisers’ statement.

Should she win the competition, the talented artist stands a chance to get a have a music album recorded, shooting a musical video and also get a scholarship to the Flawless Dance School as well as sponsorship from Squad Dancewear, among others.
“In future, Hazel has a chance to act and impress many guests from the entertainment industry including judges from BBC Introducing, national radio and regional press.
“This is no mean feat as previous judges for future Music competitions include Radio 1’s Annie Nightingale MBE, KISS FM’s Charlie Hedges and four time Ivo Novello award winner Mark Hill, also known as one of the Artful Dodger, plus A&R reps from Sony, Warner and Syco Entertainment.”Advertisement