A 14-year-old boy is among a group of men linked to the notorious machete gangs arrested this past week for allegedly murdering a police officer at a mine in Battlefields, Kadoma on 29 January 2019.

Munashe Mukute was arrested together with two other teenagers, Lyton Tshuma and Tonderai Musasa both aged 18.

Those whose ages, residential addresses, full names and surnames were not given are Mike, Kwadez and Givy. 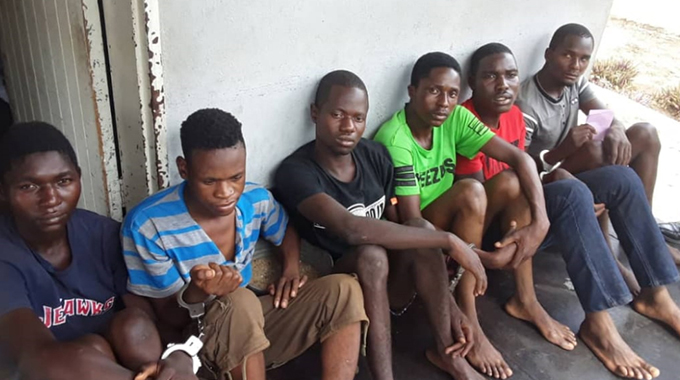 Some of the seventeen suspects arrested in Kadoma reported to be members of the gang known as “Team Barca”. (image taken from the Herald)

Tshuma and Mawire were on the police wanted persons list for murder cases which they allegedly committed at Runwell Business Centre on 31 January 2018 again using a machete.

The other, Demo and Munetsi have been hiding after committing the offence and were arrested after detectives from CID Kadoma got a tip-off and raided houses in Ascot Gweru.

During the incident, they are said to have resisted arrest and attempted to escape, leading to the police opening fire with Demo shot twice on the left knee and ankle while Munesti was shot slightly below the left knee.

The two are currently admitted at Kadoma general hospital under police guard and in a stable condition.

They were expected to appear in court this Monday