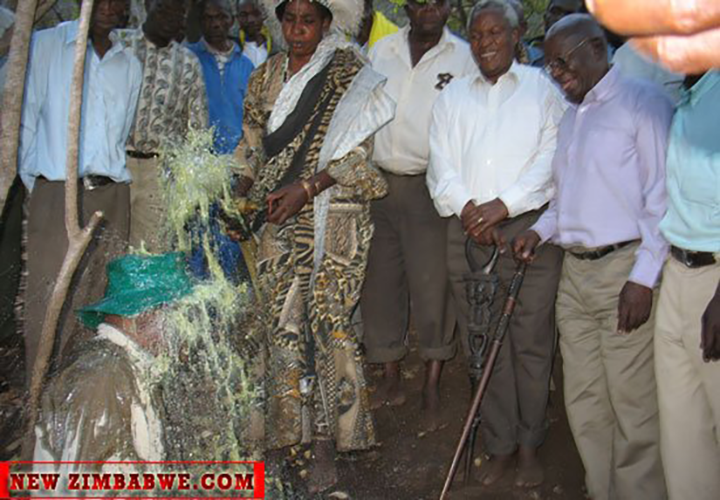 By Lenin Ndebele I News24.com

There’s a story that never gets tired in Zimbabwe. It’s that of cabinet ministers who, in March 2007, briefed then-president Robert Mugabe about a spiritual healer who could make rocks ooze diesel.

At the time, Zimbabwe was under immense economic pressure, with astronomical inflation spikes, that had never been seen in Southern Africa.

Basic commodities were in short supply, and sourcing fuel was challenging because the country had no foreign currency reserves to buy oil.

Mugabe had even toyed with the idea of mortgaging the country’s natural resources, such as gold, in exchange for oil in a deal with Libyan strongman Muammar Gaddafi.

The news, which was too good to be true, was welcomed, and Mugabe’s ministers went to appease the spiritual healer, Rotina Mavhunga, at her shrine in Chinhoyi, a town 115km east of Harare.

After being given about Z$5 billion, a house and a car, she demonstrated her con in front of a high-powered delegation, which included several ministers.

Her make-believe trick in front of the security cluster bosses was enough for the government to buy into the scam.

But when it was time for the diesel to be tapped for commercial use, Mavhunga refused.

Supplying the whole country with diesel was not part of her plan. As such, she said Mugabe, aged 83 at the time, should walk from Harare to the area barefoot.

That was an impossible ask and it raised suspicion. Eventually, she was found out and sentenced to prison. She spent 27 months in jail for her con.

A similar excitement has gripped the country 15 years later, but this time the optimism is backed by science.

Invictus Energy Limited, a firm listed in Australia, has been doing exploration work for oil and gas at the Cabora Basa Basin in Muzaramabi District, along the Mozambique-Zimbabwe border in Mashonaland Central province.

For almost three years, the company has conducted a seismic survey to investigate the possibility of viable oil and gas deposits.

Its work has been widely reported in the press and even thrown around in political debates. Hence there has been a lot of disinformation and misinformation around Zimbabwe’s oil and gas “find”.

Scott Scott MacMillan, the managing director at the company, said:

We haven’t found oil or gas. Our hope is that we will find the deposits.

He added that confusion arose in 2018, when it was announced that Invictus had been given the go-ahead to carry out its preliminary work.

“There was a tweet sent by a credible government source that we had found the deposits. It was an honest error, but it went viral, and since then, it has been hard to correct it because people think there is oil or gas that we have found,” he said.

Invictus anticipates that the Mukuyu-1 well will be drilled in early September, with a goal of 20 trillion cubic feet and 845 million barrels of gas condensate. The drilling of all seven stacked targets is projected to take 45 to 60 days.

Oil and gas an expensive venture

Invictus spent R272 million (around US$16 million) in exploration over the past four years, and drilling is under way now.

We are drilling depths of up to 4km on the Mukuyu 1 site where we are checking for gas. That process of drilling could take up to eight weeks.

Drilling the Mukuyu 1 site costs up to another R272 million. The next well the firm will drill is the Baobab 1 site which would be about 1.5km deep.

That will cost about R170 million ($10 million). The two wells would then bring the company’s drilling expenditure to R442 million ($26 million).

“Invictus Energy Limited is pleased to announce a private placement to raise $25m at $0.23 per share following the company’s decision to sole fund the initial drilling campaign in Zimbabwe’s Cabora Bassa Basin,” the firm said in a statement.

McMillan said his firm was open to strategic partnering opportunities in the future that could add value for shareholders as it continues to progress the development of the project.