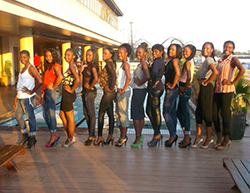 THE Miss Environment Zimbabwe beauty pageant national finals have been set for November 28 with eighteen models vying for the coveted title.
The finals will be held at the Hartsfield Sports ground in Bulawayo.
The models are expected to attend boot camp from November 26 to 28, where judges will assess the environmental projects they have been involved in, in preparation for the national finals.
Speaking at a press conference, pageant director, Briaton Takundwa, said the contestants have been drawn from all the provinces in the country.
He noted that while it has been the norm in the pageant world to crown a queen, they were looking for an ambassador who would bring awareness to environmental issues.
“Whoever will be crowned will be called Miss Environment queen ambassador. She then becomes the voice of the environment, the face of the environment,” said Takundwa.
He also revealed that instead of having first and second princesses, they have decided to go with Miss Climate and Miss Global Warming, respectively, whose major roll would be to promote climate and global warming issues.
The Miss Personality category would be replaced by Miss Anti-Pollution.
“Pollution is one of our major problems we have in Zimbabwe that also contributes to the scourge of global warming.
“Most of these problems start with pollution, throwing away paper, plastics, which end up being burnt and then emit carbon which destroys the ozone layer,” said Takundwa.
On the judging criteria, 90 percent of the points would go towards environmental projects the models have been implementing in their various communities while the 10 percent would be judged on the ramp.
“The uniqueness of this pageant is that you reign before you win. In other pageants, you present a proposal that says when I win I will do this and that but with Miss Environment you present what you have already been doing in your community,” said Takundwa.
The pageant director also revealed that they have partnered with the Environmental Management Agency (EMA) who will provide their expertise during the adjudication process.
On the morning of November 28, Takundwa revealed that they would also launch the corporate environment awards, to honour companies who have dedicated themselves to taking care of the environment.Advertisement

“These awards are focused on the company’s corporate social responsibility if they embrace anything that has to protect the environment.
“We are looking at how much they have put into environmental work, how much they have invested into the protection of the environment. We are working on the strategy with EMA,” he said.
For their efforts, the winners of the pageant will walk away with a two nights, fully paid holiday package at a resort location and various hampers.