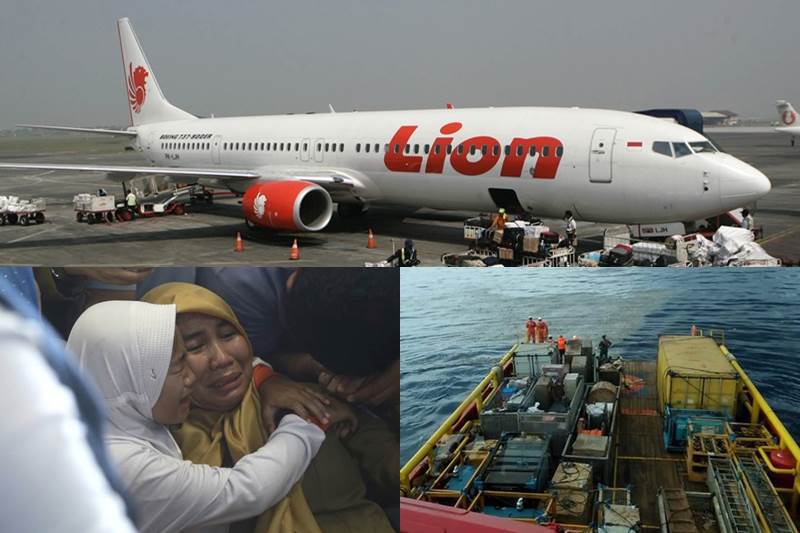 An Indonesian airliner has crashed into the sea with 189 people on board.

The Boeing 737, owned by the low-cost airline Lion Air, went down after taking off from the capital Jakarta.

Flight JT 610 was headed for the western city of Pangkal Pinang. Rescuers have recovered some bodies and personal items, including baby shoes.

There is no sign of survivors. The cause of the crash, which involved a plane that had been in operation since August, remains unclear.

The incident is reported to be the first major accident involving a Boeing 737 Max – an updated version of the 737.

“We need to find the main wreckage,” said Bambang Suryo, operational director of the search and rescue agency. “I predict there are no survivors, based on body parts found so far.”

Relatives of those on board are waiting anxiously for any news at a crisis centre at Jakarta’s Halim Perdanakusuma airport, their faces stained with tears.

At a desk under a white tent, Lion Air staff are taking down their details. At the top of the forms, they are asked to specify their relationship to the missing – husband, mother, child.

Murtado Kurniawan’s wife was on the plane. They are newly married and she was making the journey for work.

“I can’t live without her, I love her,” he says through tears. “The last thing I said to her, was ‘be careful’. I always worry about her when she goes away. When I saw on TV that the plane had crashed, my whole body went weak.”

Dede dropped her niece Fiona Ayu and her family off at the airport on Monday morning, to make the short journey home. Fiona is trying to get pregnant via IVF and her family thought it would be good for her to get some rest.

“The airline kept telling us to wait and wait for news, but the images on social media and television are very bad,” Dede says. “But I am still holding out hope that she will come back, I am praying and praying for that.”

Lion Air said in a statement that the pilot and co-pilot had more than 11,000 flight hours between them.

Three of the crew on board were trainee flight attendants and one was a technician.

Twenty employees from Indonesia’s finance ministry were also on board, the BBC has learned.

A ministry spokesperson said they worked at the finance ministry offices in Pangkal Pinang but had been in Jakarta for the weekend.

The aircraft involved in the crash was made in 2018. It is a single aisle plane used for short-haul travel.

In a statement, Boeing expressed sympathy for the victims and families and said it “stands ready to provide technical assistance to the accident investigation”.

Australia told government workers and contractors to stop using the airline until the findings of the investigation were out.

Indonesia, a vast archipelago, is heavily reliant on air travel, but many of its airlines have a poor safety record.

It has had issues of safety and poor management in the past and was banned from flying into European airspace until 2016.

In 2013, Lion Air flight 904 crashed into the sea on landing at Bali’s International Airport. All 108 people on board survived. In 2004, flight 538 from Jakarta crashed and broke up on landing at Solo City, killing 25 people.

In 2011 and 2012 a number of pilots were found in possession of methamphetamines, in one incident hours before a flight.