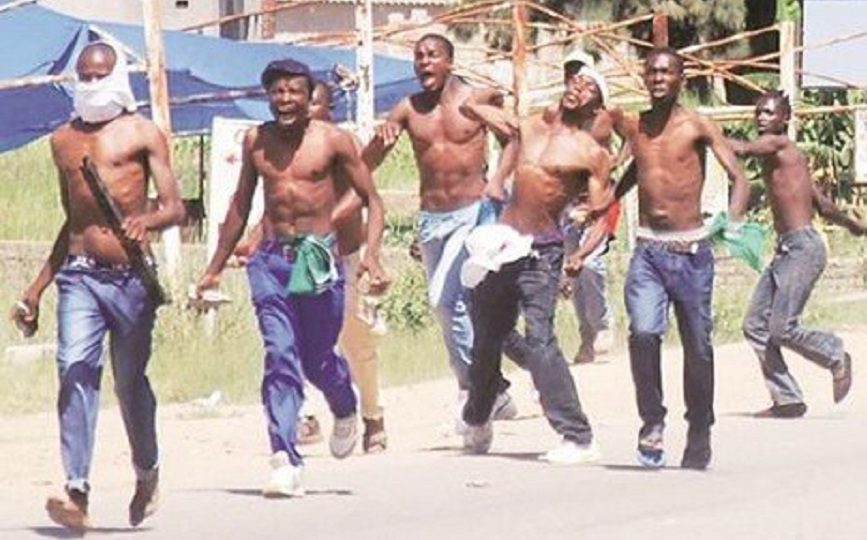 The video is just 2 minutes and 29 seconds long.

A group of elderly men and women sit on low wooden seats around an open space somewhere in rural Zimbabwe. A young woman recording the scene pans the small group and then zeroes in on each of the senior citizens, demanding each person’s name, village or ward of residence, phone cards, and even identity cards. It is clear the voice belongs to a young woman, perhaps someone in her twenties. The rage, disdain and rudeness in her voice are unmistakable.

In a voice feeble with fear, one woman concedes that the small group had gathered for a “triple C” meeting, presumably a reference to CCC, the political formation led by Nelson Chamisa.  An old man sits helplessly in the middle of an open space. He is wearing a pink golf T-shirt and blue pants. Just behind him also sits a small boy, hands over his knees, quietly observing.

The group of seven or so young men and the one woman fire a series of questions at the pink-shirted man while swinging sticks at him menacingly in his face. It is the Zezuru dialect of Shona spoken in most parts of Mashonaland West and indeed, Harare, the capital city. What’s your name? How old are you? Are you the one who invited these people here? Why are these people gathered here? Who invited these people here? Which ward do you reside in? Where is your phone? Questions rain on him.

“I am a Morris Jeremiah,” the old man says to the young woman behind the camera. Before he can coherently respond to the rest of the questions, one young man in a white shirt and white shorts swings his big stick, striking the old man across the back.

“They must lie down! They must lie down!” the young men shout above the noise. Like a pack of wild dogs zeroing in for a kill, the rest of the young men quickly throw Old Jeremiah to the ground, lower his trousers, exposing his underwear, and four of them viciously whip his bottom, legs, and back with their switches all at the same time.

“Where is your phone?” one young man barks at him when there’s a lull in the whipping. One young man stomps Old Jeremiah’s head, stuffing the head into the dirt with his boot while another roughly checks the old man’s pockets. Old Jeremiah’s light grey phone emerges from the pocket and is confiscated. Old Jeremiah lies in the dirt, unmoving as the camera moves to an old woman. Why did you let these people gather at your house? The young woman behind the camera demands. The unmistakable sounds of further whipping are heard off camera, presumably targeting Old Jeremiah. The video ends at 2 minutes and 29 seconds.

It is Saturday, January 7th, 2023. The video is quickly shared and dissected by Zimbabweans at home and in the diaspora. Family groups, soccer groups, intellectual groups, and friends share the video on WhatsApp, the popular mobile app that keeps many Zimbabweans in touch with the goings-on in the country and beyond.

Many people are outraged by the video and social media sleuths quickly piece together evidence from the video and conclude that the torture happened at Bhunu Village near a place called Matutu off the Uzumba Maramba road in Mrewa North, Mashonaland East, Zimbabwe. The whole area is called KwaMahachi, one individual familiar with the faces and names in the video adds on Facebook, another popular social media app used by many Zimbabweans.

Maramba-Pfungwe and Uzumba in rural Mrewa are known for returning massive votes in favour of ZANU PF parliamentary and presidential candidates. In the 2018 elections, Maramba-Pfungwe constituency, ZANU PF got 2 4317 votes against the main opposition, MDC Alliance which only managed 929 votes in the House of Assembly election while in Uzumba, MDC Alliance lost by 1850 votes to ZANU PF’s 21405.

So why is all this important? Here is why: While this video is a mere 2 minutes and 29 seconds long, it sets the tone for Zimbabwe as the country gears for nationwide elections, expected in either July or August 2023. Emerging from the ravages of the liberation war against the Rhodesian regime of the 1970s, Zimbabwe remains stuck in a politics of intolerance enforced through brute violence. Rituals of torture such as cutting off lips(presumably for “selling out” by sharing secrets with “the enemy”) to chopping off wrists(euphemistically called “short sleeve”) and entire hands(called “long sleeves”) are well-known. Some of these gory details are even popularized in partisan campaign songs.

Only grudgingly giving up on a de jure one-party state ideology under the ZANU PF party, Zimbabwe is yet to enjoy a violence-free election in all of its 43 years. The appalling torture of Old Jeremiah has its roots in the torture and killing of “vatengesi” or alleged sell-outs during the war of liberation, and in Gukurahundi, the 1980s massacre of suspected insurrectionists and their purported supporters in parts of Matabeleland and Midlands regions.

It reared and showed its ugly head again in the infamous daylight shooting of citizens on 1 August 2018  in Harare by elements of the army. It has its roots in Operation Murambatsvina and the orgy of violence that forced the late opposition leader Morgan Tsvangirai to abandon that election cycle. It has roots in the intra-ZANU PF infighting and the outright coup d’état of 2017 which ushered in the country’s new leader, ED Mnangagwa. The history of demonization and persecution of popular musicians whose body of work is deemed “unpatriotic” such as Dr. Thomas Mapfumo and lately, Winky D, is part of this trajectory of violent opposition to democratic voices and free expression.

2023 promises to be another dark chapter in Zimbabwe’s experiment with democracy. The ugly ghost of political intolerance and violent suppression of legitimate opposition activities is here to stay. The only difference between the butchering of Ndebele people in 1984 during Gukurahundi and Old Jeremiah at Bhunu Village, Murewa in 2023, is the miracle of the smartphone. ZANU PF foot soldiers that comb and monitor villagers in remote places like Bhunu Village are not blind to the potentially disruptive power of the smartphone.

It is therefore no surprise at all that the thugs who brutalized Old Jeremiah are also seen demanding phone cards and even confiscating the phones themselves – on video. While ZANU PF violence is not the preserve of rural communities, it will be a particularly difficult year for rural populations as they negotiate another election cycle marked by intolerance to plural politics.

For all his lofty democratic promises upon taking over from his mentor whom he displaced in the army-backed coup, all evidence shows that the government of ED Mnangagwa will seek to extend its grip on power at all costs, including at the lives of the likes of Old Jeremiah. What does the future hold for the little boy in the yellow shirt and red shorts who observes the brutalization of Old Jeremiah? What does the future hold for a Zimbabwe where free democratic participation in elections remains a matter of life and death for Old Jeremiah and his fellow villagers whose heads are literally under the jackboot of lawless ZANU PF thugs and their paymasters?

*Joseph Chikowero, PhD writes in his personal capacity. The views expressed here are his own. Feedback is welcome at chikowero@gmail.com