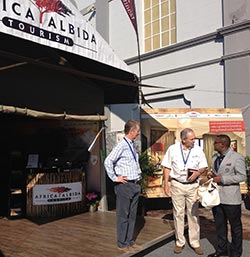 ONE of the leading hospitality groups in the country, Africa Albida Tourism (AAT) has said 2013 was its best year ever after increased occupancy at its flagship Victoria Falls Safari Lodge as tourists return to Zimbabwe’s shores.
“Last year, we sold 22,834 room nights and 41,101 bed nights while in 2012 the lodge sold 19,417 room nights and 34,950 bed nights. This is the best we have achieved ever,” chief executive officer Ross Kennedy told The Source.
A room night is one hotel room occupied for one night, a statistical unit of occupancy while a bed night is a measure of occupancy per person per night.
AAT started operating in 1995 and its portfolio includes and the RCI Gold Crown Resort Lokuthula Lodges, also in Victoria Falls, and Ngoma Safari Lodge in the Chobe, Botswana.
It also owns The Victoria Falls Safari Club, an exclusive 20-room block located adjacent to the Victoria Falls Safari Lodge and the Boma – Place of Eating, a popular themed restaurant in the resort town.
Zimbabwe received two million tourists in 2012 and that number is seen rising by 50 percent to three million by 2017, according to a recent report by a United Kingdom-based independent financial advisory company.
The country’s profile, battered by years of a political and economic crisis, was boosted by hosting the 20th United Nations World Tourism Organisation (UNWTO) general assembly, along with Zambia.
“The future is bright for the country and we anticipate even more arrivals as we start 2014,” Kennedy said.Advertisement