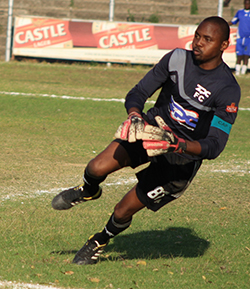 PREMIERSHIP log leaders ZPC Kariba have contributed three players on the 2014 Soccer Stars of the Year Calendar.
It’s the highest number that a club has contributed this season.
Goalkeeper Tendai Hove who represented his club as captain, veteran striker Limited Chikafa and centre back Dennis Dauda all made it on the calendar.
Interestingly however, Hove was one of the panellists who selected the eleven outstanding players of the season.
Harare City veteran defender – captain David Kutyauripo also made it on the calendar.
Defending champions Dynamos had two players who made it on the calendar- midfielder Stephen Alimenda and defender Themba Ndlovu.
Caps United contributed one player – midfielder Tendai Samanja.
FC Platinum have Thabani Kamusoko while from Hwange there is striker Evans Rusike. Highlanders’ Charles Sibanda also made it into the list while How Mine also has Kuda Musharu in the list of the season’s most visible talent.
The winner of the Castle Lager Footballer of the Year would be kept a secret until the banquet set for December 12.
The selection, done under a new PSL voting system, is a secret computerised electronic ballot which took place in Harare on Saturday.