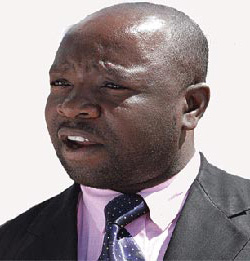 Below are recommendations on the 2016 national budget by Bikita West legislator Munyaradzi Kereke presented at Victoria Falls on Saturday (Oct. 31)
[INPUT ON THE “HOW” QUESTION]

COMMENTS ON THE PROPOSED FRAMEWORK AND SPECIFIC RECOMMENDATIONS

FISCAL BUDGET SHRINKAGE
Zimbabwe’s size of fiscal budget has largely remained virtually static at around US$4 billion annually, and is seen shrinking further to US$3.99 billion in 2016. Revenue performance is seen remaining subdued at around US$3.75 billion in 2016, with expenditures targeted at US$3.99 billion in 2016. This scenario of shrinkage of the fiscal budget is eroding the power of the National Budget as a policy instrument to propel economic growth and development. A hospital patient in a state of low blood pressure (negative inflation), low pulse (low GDP growth) cannot continue to be asked to fast/go on a diet. What is needed is a stimulus. The fiscal instrument must be expansionary at this stage and not contractionary.
PROPOSED SOLUTIONS TO CREATE FISCAL SPACE
It is recommended that the Hon Minister of Finance considers the following options to create and increase fiscal space:
RADICAL REFORMS AT ZIMRA
In 2012 ZIMRA collected revenues that were 28% of GDP and this performance has weakened to 25.5% of GDP in 2015. This clearly means serious leakages. These can be plugged off as follows:

Removal of revenue retention by line ministries and Government departments so that all revenues are centralized at ZIMRA as the agent for Government for revenue collection.
ZIMRA to sweep real time at the end of each trading day all revenues collected to a central account visible to the Treasury. The current system of ZIMRA operating and holding funds in many accounts at different banks obscures Treasury’s ability to see the total picture of revenue on a real time basis.
ZIMRA should issue electronic tax registrations to ALL points of economic activity in the country and each centre (formal and current informal) must account as a revenue centre particularly in respect of VAT, PAYE, and Income tax. Issuance of such cards is very low cost. Each card would capture full datasets for each client.
Register ALL landlords and collect rent tax on real estate properties. It is a basic fact that rent is a taxable income but most landlords are going scot-free without paying taxes. Hotlines should be opened for lodgers to register and report on where they are paying rent. A lot of rent income is not being taxed.
Introduce stiff penalties for ZIMRA officials caught entangled in corruption.

RAISING GDP GROWTH RATES TO ZIM-ASSET LEVELS
The envisaged real GDP growth rate of 2.7% for 2016, and the 1.5% for 2015 (which is likely to come out even much lower to around 0.5-1% due to the downward effects of power cuts) are way below ZIM-ASSET targets of 6-8% annually. ZIM-ASSET is achievable. We must not admit failure easily as would be the case if we allow GDP to only grow by 2.7% in 2016 as proposed.
The following measures are recommended for consideration:Advertisement

Agriculture cannot recover if farmers are simply left to the device of private banks. The world over the farming sector gets special recognition and support from central Government due to the “public good” nature of agriculture as an economic activity. Government has a moral and constitutional obligation of ensuring food security. Access to food is a constitutional right which cannot be sub-let for closure by the private sector as the profit motive may shun production under tight liquidity circumstances as are prevailing in Zimbabwe. The US$1.7 billion needed for crop and animal husbandry for 2015/2016 is not coming out due to a clear stalemate in the banking sector. The Hon Minister should, therefore, consider the following in agriculture:

Treasury, working with Ministry of Agriculture to compile register of farmers with irrigation capacity and such farmers to participate in a Government-guaranteed inputs supply scheme. Agro-inputs suppliers release inputs to the targeted farmers. The irrigation capacities neutralize exposure to drought. The famers then deliver produce directly to a centralized grain account from which Government would market the produce to defray suppliers’ credits, as well as meeting strategic grain reserves requirements. This approach does not require actual spending initially but it enables farmers to produce.
Government to swiftly address remaining concerns on the 99 year lease so that farms can stand as collateral.
Invite agro-processors to partner with Arda and CSC to produce at vast tracts of land remaining idle.
Issue agro-bills to NSSA and other similar institutions and direct funding towards capitalizing production of low-cost fertilizers and other agro-inputs.
Create a vibrant commodities exchange to increase market confidence for farmers in their assessment of viability, as well as shortening the payment cycles for produce harvested.

Have a re-think in the model of consolidation in the diamond sector. This sector has quick response cycle is carefully realigned.
Rather than designing special economic zones in a geographical sense, identify and target specific industries with the same special economic zones incentives. Industries with high labour ratios could be targeted to create new jobs.
Bring more accountability in the energy sector. ZESA, ZETDC and ZPC to account for the tenders that are in excess of US$2.4 billion that have been awarded repeatedly to almost the same companies over the past 5 years and it is ongoing.
The State Procurement Board to be subjected to a detailed forensic audit.
In the interim, invite regional railway companies to fill in the gap at NRZ through limited contracts whilst new partners are invited to partner/capitalize NRZ.
Riding on the back of the re-engagement process, float an international bond to raise at least US$2.5 billion to augment the 2016 budget.

SOLVING THE LOW CAPEX FISCAL SPACE
The proposed CAPEX allocation of US$280 million or only 2.6% of GDP is dangerously too low to have any meaningful impact on productivity of the economy. This sad reality contrasts sharply with the millions of dollars that are wasted through opaque procurement processes in local authorities and public enterprises.
It is proposed that Treasury creates a special centralized CAPEX Fund into which all local authorities’ capex components are deposited, as well as capex for public enterprises. Each institution/local authority will only draw-back (utilize) their capex funding upon presentation of credible, fairly priced capex programs that would pass Treasury scrutiny. The millions that are currently leaking through corruption and kick-backs would be put to good use through this route of enhanced capex oversight by Treasury.
Necessary statutory changes can be done to effect this. It is estimated that Treasury would be able to exercise this directed capex orientation program (DiCOP) up to an average of US$1 billion annually which is presently leaking through blatant abuses. (Local authorities, PSMAS, ZESA, AirZim, NSSA, Etc).
Screening and approval of joint ventures and new projects should focus on those that are self-funded
THE IMPORTS – EXPORTS NEXUS
Imports have remained relatively high at between US$6-7 billion annually, whilst exports have remained low and shrinking at under US$4 billion. For 2016 the Hon Minister sees exports at US$3.99 billion against imports of US$6.1 billion. The trade deficit of at least US$2 billion is a clear indication that a lot of transfer and remittance funding coming into the country, coupled with smuggling activities need to be accounted for in a more systematic way.
Treasury should create a specific budget for programs that fight corruption. Anti-corruption laws also need to be tightened and Parliament’s oversight role should be re-bolstered by re-assigning back to Parliament the power to imprison.
Exports growth require that Zimbabwe adopts low cost technologies. Duty exemptions on new, low cost technology setups for domestic production would be welcome. This would grow exports. The special economic zones program should have a bias towards exports.
IDEAL BUDGET STRUCTURE FOR ZIMBABWWE FOR 2016

Nominal GDP: US$25 billion.
This would imply a debt to GDP ratio of under 45%.
Fiscal Revenue to GDP: 30% (or US$7.5 billion) ZIMRA reforms…
Fiscal Expenditure: US$10 billion.
Debt finance: US$2.5 billion (re-engagement must produce tangible inflows).
The above will solve the wage bill problem without firing a single soul. The wage bill to total budget would decline to a ratio of 27% down from the current 80%.

It is, therefore, vital that the current budgeting process breaks away from the current “normal” of stagnation and shrinkage to under US$4 billion fiscal budgets to a more STRETCH-TARGET formulation. A child who fits in the same jacket year after year, year after year and that for many years cannot be expected to be normal. That the fiscal budget is shrinking must cause serious urge to excel and achieve the extra-ordinary. Austerity is not the right policy option given where we are. We need fiscal stimulus.
Thank you.
DR MUNYARADZI KEREKE, MP
VICTORIA FALLS