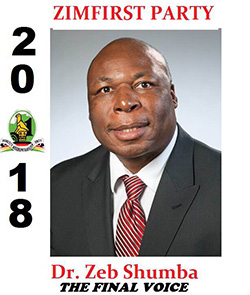 ON the eve of 2016, as in prior years, our country is at a crossroads. Like so many years before it, 2015 will be recorded in history as yet another year that the Zimbabwe government has failed its people.
The year will particularly be remembered as the year when Zimbabwe’s status as a basket case, a headless and directionless country, was finally cemented. Despite a huge endowment of natural resources and an educated people, every sector of our economy failed. The real tragedy is that those in the best position to alter our country’s course became solely obsessed with the turmoil in Zanu PF and the plight of our people remained unchanged.
It is from this tragedy that a new vision for the Zimbabwe was born. Zimbabwe First (Zimfirst), opened a new chapter in Zimbabwean politics. And on September 26, in rural Murewa the seeds of a Silent Revolution (Chimhukutira, Umvukela Othulewo) were sown.
Indeed, there was cause for celebration as a new platform of fresh ideas and fresh legs was created. It is important to note that it was not lost on the humble Zimbabweans who trekked to rural Murehwa, that the journey will be arduous.
The people were apprehensive of the work ahead but were determined to announce the arrival of a new path that will give birth to a Zimbabwe that is working again. Amid words of discouragement, on the advent of Zimbabwe First as a fully-fledged political party, there remained an unshakeable resolve and commitment to the new vision.
A methodical approach, meticulous planning and thorough preparation became the guiding doctrines of the new path, and the knowledge that Zimbabwe will work again became the unifying force.
Honesty, Accountability and Unity are the founding principles of the new vision. The Final Voice against all oppression, poverty and misery is the identified guiding voice.
It is the voice of collectivity that will usher in a new era for Zimbabwe.
Brick by brick, a solid foundation for a brighter future for our country was built as the Final Voice Campaign picked up steam. Discretely and silently, Zimbabweans from all walks of life became ZimFirsters and, against all odds, the message of hope for the nation continued to spread.
At the close of yet another miserable year, we are presented with a unique opportunity to re-examine ourselves as a people and stand up to our challenges. New ideas are needed now more than ever.Advertisement

To all those who have joined the rank and file of ZimFirst Party, we are thankful. As you have discovered on this journey, everyone matters and everyone will play their part. Together we can convert the troubles of our nation into opportunities for growth. The trials and tribulations we went through in 2015 are the ingredients needed to catalyze Zimbabweans’ march towards forging a People’s Grand Coalition.
A common cliché states that dawn follows dark. We have been through the darkest hour in our country and we declare 2016 as the year that all Zimbabweans come into a People’s Grand Coalition that will usher a dawn for our country. 2016 is the year Zimbabweans unite towards the common cause of putting the people first.
A calling to a vision that demands that we look beyond demanding for support for petty projects and ululating when we receive food handouts, seeds and one or two bags of fertiliser from those who are looting our national wealth.
The coming of 2016 demands that we renew our commitment to the building of a People’s Grand Coalition. The year 2016 demands that we renew our vows to see through our vision to fight for a peaceful, democratic and prosperous Zimbabwe.
With the will and resolve we had in 2015 and with our tried and tested concept of brick by brick building, a People’s Grand Coalition will emerge this year. We, on the dawn of 2016, extol all Zimbabweans not to expend energy basking in yesteryear glories of what could have been, political name brands or the stories of who was who in prior years.
2016 opens a new chapter in our struggle for a better Zimbabwe and our year’s agenda is already set.
The simple, straight forward and trifold agenda is laid out as follows:

Continue to methodically approach all our engagements, meticulously plan for our future and thoroughly prepare for 2018 elections, or earlier.
To put all our efforts to grow and strengthen the Silent Revolution (Chimhukutira, Umvekela Othuleyo). Year of Chimhukutira, Umvekela Othulewo.
Help lead efforts to bring Zimbabweans into a People’s Grand Coalition whose focus is to get Zimbabwe Working Again.

In our humbleness, humility and love of country, we will execute the 2016 agenda and navigate the treacherous road of dismantling a dictatorship whose roots are now well set in the fabric of our society. Together we will use our brains to bring forward new ideas necessary to achieve the success of our agenda.
It matters little that yesterday we fought on opposite sides. The love for our country unites us. We want the best for our country and her citizens and that is a national convergence principle we are willing to collectively rally around. The ideals of our struggle will remain Honesty, Accountability and Unity, and we will not waiver on this undertaking.
Lastly, on behalf of the ZimFirst Party, I would like to thank all ZimFirsters for their resilience, sacrifice of precious drops of sweat that wetted our flag in 2015 and your being there as symbols of Zimbabwe’s brighter future.
Over the course of 2015, we demonstrated that where there is a will there is always a way. In 2016, we vow to implement our agenda with conviction.
2016 will be the hallmark of our very own survival and the survival of the nation. Our gratitude also goes to all well-wishers who have given us sound and positive advice and criticism.
Our gratitude also goes to those in the current establishment who are part of the Final Voice’s Silent Revolution putting their lives on the line of fire. Not forgetting the clergy who provide spiritual wisdom, traditional leaders who continue to show light on our path and providing strength and reassurance that our journey is indeed ordained.
We thank those in the Diaspora who, despite the comfort offered by their adopted homes, are coming out daily to swell the ranks of the Silent Revolution.
We thank the people who toil every day in Zimbabwe for their oneness and belief in the Silent Revolution.
Lastly, our gratitude goes to the youth who are the future of our country and the mainstay of our movement.
Our journey to redeem our country to enable it to once again offer jobs, health services, water supplies, amenities, electricity, quality education, safe roads and restoration of investor confidence will intensify in 2016 albeit seismically.
Thank you
Dr. Maxwell Zeb Shumba – ZimFirst Party President