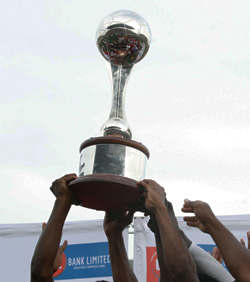 THE Premier Soccer League (PSL) has announced its 2018 league race shall commence 10 March this year with returnees Mutare City Rovers joined by three new comers among the country’s football elite.
This was announced by the top flight league on its website Tuesday.
“The 2018 Castle Lager Premier Soccer League season is expected to commence on Saturday 10 March 2018. The fixtures for the season will be released in due course,” PSL said.
A total of 18 clubs will participate in the 2018 league race.
The new comers are Bulawayo Chiefs FC, Herentals FC and Nichrut FC.
But of all the clubs set to compete in this year’s premiership race, 2017 Champions FC Platinum are the most active in the current break as they are participating in the CAF Champions league with their match match set for 10 February away to Angola’s Club Desportivo de Agosto.
PSL also announced that it would hold its Annual General Meeting Friday 4 March with crowd management set to be among the key issues to be discussed.
The country’s football governors are at a loss on how to deal with recurrent crowd trouble in some of its fixtures with some of its cash-strapped clubs often forced to pay fines for violent acts by their supporters.
In March last year, Highlanders was forced to surrender 3 points to premiership rivals when its angry fans started pelting officials on the pitch at Barbourfields Stadium to protest a Dynamos equalising goal which they strongly felt shave been ruled offside.
The match was abandoned few minutes before the half time break with the rivals tied a goal apiece.
Similarly, a Chibuku Super Cup tie between Harare giants Caps United and Shabanie Mine was last October also forced to end prematurely at Maglas Stadium when Makepekepe fans pelted an assistant referee for flagging a Caps goal offside.
Meanwhile, among some of the key issues to be discussed at the PSL AGM are club licensing, club structures and competitions.
PSL appealed to member clubs to ensure they have registered their players by Friday 23 February 2018 to enable the verification of players’ information and processing of licenses.
“The First Player Transfer window closes on 31 March 2018. Clubs can still alter their squads until the player transfer window closes,” added the football association.Advertisement