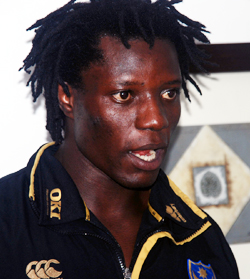 FORMER Zimbabwe striker Benjani Mwaruwari believes getting the best out of the trio of Mikel Obi, Alex Iwobi and Victor Moses will play a key role in Nigeria’s aspiration of having a good outing at the 2018 FIFA World Cup in Russia, Completesportsnigeria.com reports.
The three players were instrumental in the Super Eagles’ qualification for Russia 2018.
Captain Mikel led by example and scored crucial goals against African giants Algeria and Cameroon.
Chelsea wing-back Moses netted four times in four qualifying games to prove his importance in the team, while Iwobi who plays in the English Premier League for Arsenal hit the back of the net twice, including the decisive winning goal against Zambia.
Benjani who had stints with clubs in France, England and South Africa during his active days stated that the three players are the Eagles’ key men.
“The Super Eagles have a lot of good players in their team but I believe Mikel, Iwobi and Moses are the most important players in the side,” the former Portsmouth and Manchester City star told Completesportsnigeria.com.
“They will be crucial to whatever Nigeria achieve in Russia and it will important for the coach (Gernot Rohr) to get the best out of them.
“If they hit top form in Russia, then I believe the Super Eagles will go far in the competition.”
This article is taken from www.completesportsnigeria.com.Advertisement