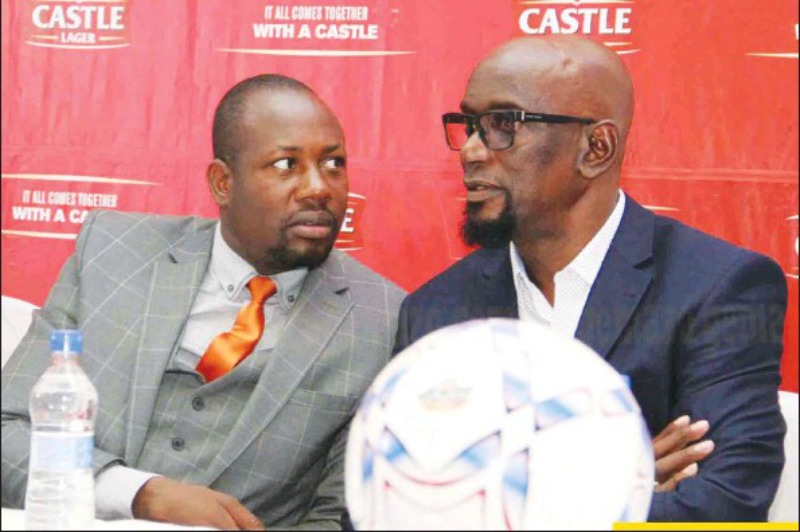 PSL chairperson Farai Jere and former Dynamos chair Kenny Mubaiwa. Jere has a stadia headache as the season kick off
Spread This News

THE 2019 Castle Lager Premier Soccer League (PSL) season kicks off on Friday, amidst a looming crisis after only nine stadiums were cleared to host topflight league matches, while others have been condemned and deemed unfit for use by football authorities.

An initial inspection of the state of stadiums in the country by the ZIFA First Instance Board, which also includes PSL officials and the referees’ committee members, revealed that Ascot, Sakubva, Trojan Mine and White City stadiums will not be allowed to host PSL matches unless specific issues are addressed to meet the subcommittee’s recommendations.

“The Zimbabwe Football Association (ZIFA), hereby informs your office that the First Instance Board has provisionally homologated the below listed teams to host Premier Soccer League matches for the 2019 PSL football matches.

“The homologation is subject to other specific details being addressed at agreed specific timelines. Please be further advised that detailed stadium inspection reports will be forwarded to your offices and stadium owners in due course,” Mamutse said.

Gweru-based Air Force side Chapungu, newly promoted TelOne and Mushowani Stars will be the biggest casualties as they will be forced to host their home matches away.

In fact Chapungu, who narrowly survived relegation last season, will host Bulawayo Chiefs for their opening match of the season at Mandava on Saturday, the same day Mushowani Stars will be at home away from home when they host Harare giants Dynamos at Rufaro.

Mutare-based Premiership new boys Manica Diamonds are also facing a dilemma ahead of the maiden season in the topflight league after both Sakubva and Vengere stadiums failed to pass the test.

Manica Diamonds will have some more time to make improvements at Vengere which they have earmarked as their preferred home ground as they start the season with a tough away encounter against CAPS United at the National Sports Stadium.

Defending champions FC Platinum, who will be gunning for a third successive PSL crown will get the new season underway with a tricky opening match against Harare City at Rufaro.

Bulawayo giants Highlanders, who have been battling a crippling player strike over unpaid salaries for most of the pre-season, will be hoping for a positive start to the new campaign when they face Black Rhinos at the National Sports Stadium on Saturday.