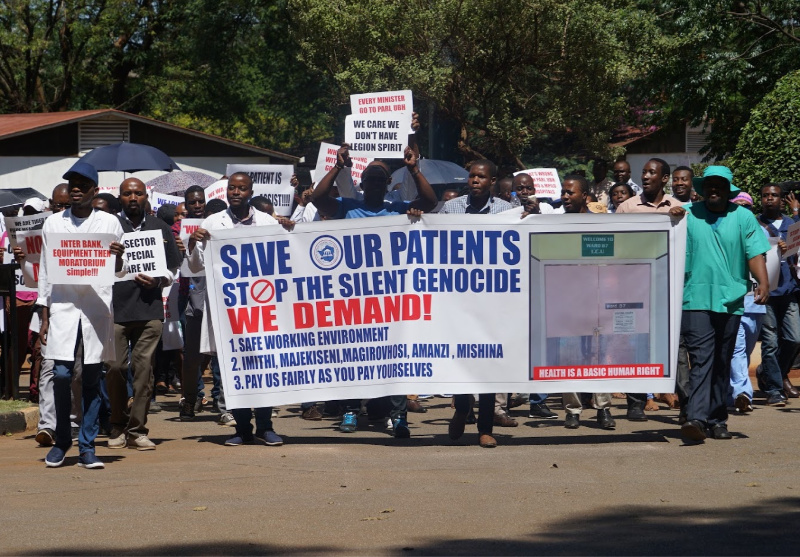 HUNDREDS of Zimbabwe public hospital junior doctors who are on strike over better salaries and working conditions, remain hopeful that government will finally engage them for meaningful dialogue to end the four-month impasse between the parties.

Junior doctors downed their tools in September 2019, demanding that their salaries be pegged in US dollars, better working conditions and for government to provide the country’s hospitals with new equipment and medicines.

In response to the doctors’ demands, government decided to dismiss over 400 professionals and only a paltry 46 of them, were allowed to resume duty, according to media reports late last year.

However, the Zimbabwe Hospital Doctors Association (ZHDA) which has spearheaded the crippling job action said Thursday, it was now time both government and the striking staff bury the hatchet and engage in fruitful discussion.

The ZHDA went on to concede that 2019 had been “tough year for the entire profession”.

“2020 is the year that as the ZHDA, we are hopeful that a solution will be finally found through dialogue and continuous engagement with all interested stakeholders,” ZDHA said.

“The ZHDA remains committed to advocating for the improvement of conditions of services and for the best treatment outcomes for our patients. We are committed to promote dialogue between medical professionals and policy makers.

“As a labour movement, the ZHDA takes pride in representing all government doctors on issues concerning their welfare and the promotion of a healthy working environment,” the ZHDA said.

Last month, the junior doctors also rejected an offer made by billionaire businessman and Econet founder Strive Masiyiwa of giving each doctor a $5 000 monthly incentive, transport and lunch for six months. The incentive was being availed through Masiwa’s philanthropic organisation, the Highlife Foundation.

However, the government has since indicated that it is recruiting doctors from China and Cuba to fill up the vacuum left by the striking doctors.