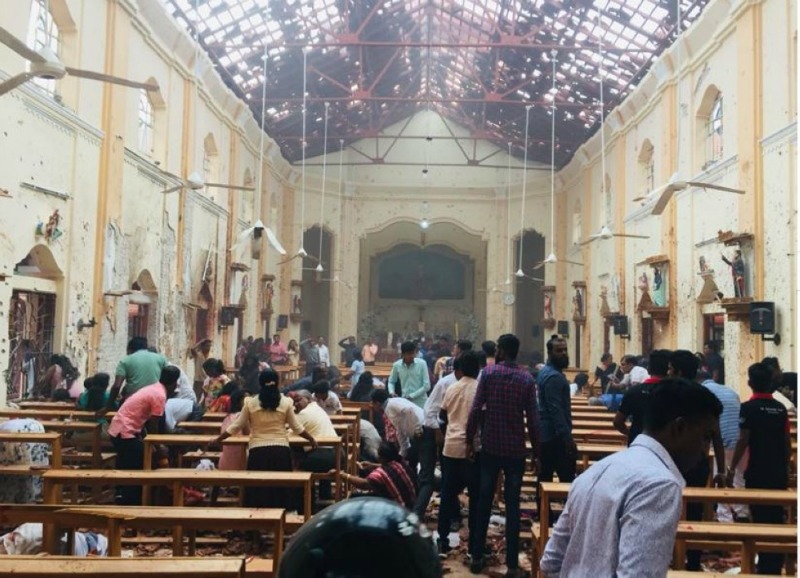 At least 207 people have been killed and 450 hurt in explosions at churches and hotels in Sri Lanka, police say.

Eight blasts were reported, including at three churches in Negombo, Batticaloa and Colombo’s Kochchikade district during Easter services.

The Shangri-La, Kingsbury and Cinnamon Grand hotels and one other, all in the capital, were also targeted.

A national curfew has been put in place “until further notice” and social media networks have been temporarily blocked.

A foreign ministry official has said at least 27 foreign nationals are among the dead.

Reports say seven people have been arrested, but it not yet clear who is responsible for the attacks.

Sri Lanka’s defence minister has said the attacks were probably carried out by one group.

The first reports of explosions came at about 08:45 (03:15 GMT) local time – with six blasts reported close together at churches and luxury hotels.

St Sebastian’s church in Negombo was severely damaged in one explosion, with dozens killed at the site.

Images from inside showed blood on the pews and the building’s ceiling shattered.

There were also heavy casualties at the site of the first blast in St Anthony’s, a hugely popular shrine in Kochchikade, a district of Colombo.

Robert Tyler, who has lived in Sri Lanka for six years, told the BBC that at least two of the hotels appeared to have had their restaurants targeted at a busy time for breakfast.

A seventh explosion later hit near the zoo in Dehiwala, southern Colombo, and an eighth explosion was reported near the Colombo district of Dematagoda.

Media say it was suicide bomber and that three people, believed to be security personnel, were killed during a police raid.

Security has been stepped up at the country’s main Bandaranaike International Airport.

Officials have said people will be able to travel to the airport under the curfew if they produce their boarding pass and identification at checkpoints.

Travellers are being advised to arrive at the airport four hours before their scheduled flight time.