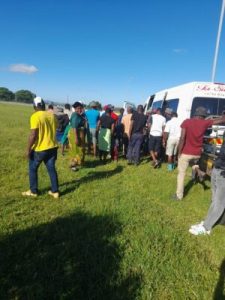 Transport spokesperson Tidimalo Chuene said the bus was stopped at around 08:00 last Friday morning along the N1 on the Mashishing and Silicone bypass and was en-route to Cape Town from Zimbabwe.

“It was later discovered that the overloaded vehicle did not have an operating permit to travel in South Africa and the SAPS and Department of Home Affairs will conduct investigations and verification of the legal travelling documents,” her statement read.
Chuene said the department is concerned about the number of incidents involving illegal foreign vehicles travelling in South Africa without proper documents.
“We call on all foreign drivers to respect the laws of the country and apply for proper documents when entering the country,” she said.

Apparently, South Africa is on a blitz against undocumented immigrants most of them Zimbabweans.

The country is expected to send back a big number of Zimbabweans whose permits were not renewed.