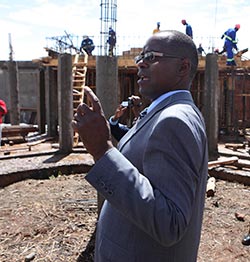 AT least 28 diamond cutting and polishing factories have closed shop in the last two years due to high licence fees and lack of access to diamonds, industry players said on Monday.
“In 2013 most factories closed down and by end of that year there was only one factory left,” chairman of the Diamond Beneficiation Association of Zimbabwe, Richard Mvududu told Members of Parliament during a tour of a diamond school in Mount Hampden.
He said the sector had to contend with high annual licencing fees that had been increased from $20,000 to $100,000 in the last two years, a short licence tenure of 12 months and high export fees of $5 000 per parcel of diamonds.
In addition, a 15 percent sales tax is levied on any company that buys diamonds for purposes of cutting and polishing locally.
“As a result we are failing to attract meaningful investment into the sector. No investor would want to invest his money for such a short period,” said Mvududu.
Also, the diamonds are purchased using a tender system which he said favoured a few players.
“We are appealing to the mines ministry to remove the tender system because it does not promote development in the industry. At the moment the winner takes all while others are left with nothing,” he said.
Mvududu said there was need for a local grading facility to be set up so that local diamonds could be evaluated locally to fetch a higher price on the international market.
“Due to the quality of our diamonds (alluvial) we need proper equipment so that we can properly evaluate and price our stones,” he said.
Chairman of the Diamond Technology Centre, Lovemore Kurotwi, whose private college has been churning out 300 graduates annually for the past two years, said the country’s mining laws were unfavourable.
“Licence fees are an issue and they add up to the production costs making it difficult for a Zimbabwean product to be competitive on the international market,” he said.
Kurotwi who is constructing a multi-million dollar diamond centre which is expected to be operational mid-year said the centre would be a one stop shop for training, polishing and cutting diamonds.
It would also house various other players including regulators.
He said he had so far invested $5 million into the projected which is expected to cost around $200 million and looking for investors to inject more capital.Advertisement