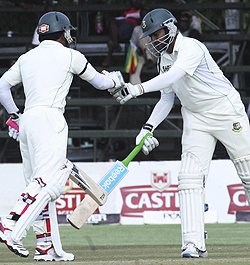 Second Test, Day One
Bangladesh 300 for 6 (Shakib 81, Mushfiqur 60) v Zimbabwe
A 123-RUN stand between Shakib Al Hasan and Mushfiqur Rahim allowed Bangladesh to put up a healthy score on day one of the second Test against Zimbabwe on Thursday despite giving five wickets away cheaply.
Bangladesh closed the day on 300 for six after being asked to bat, but while the score at stumps was more than they managed in two innings of the first Test, in truth only Mushfiqur could claim to have fallen to quality bowling.
The Bangladeshi captain was trapped lbw for 60 in Kyle Jarvis’ first over with the second new ball as the seamer found some movement into the right-hander, but as was the case in Zimbabwe’s 335-run victory last week, Bangladesh’s top five were all complicit in their own downfall.
Jahurul Islam and Mohammad Ashraful were dismissed in the first session, with Jahurul guilty of an ungainly sliced drive and Ashraful caught at gully after making a mess of an attempted pull shot.
Tamim Iqbal then ran himself out after lunch in search of a 50th run, before Mominul Haque chipped a tame catch to mid-off to leave Bangladesh reeling on 125 for four.
However, that brought Mushfiqur to the crease, and he showed his teammates the benefits of patience on a pitch that did not offer as much assistance to the bowlers as its green tinge suggested.
While Shakib at times rode his luck on his way to 81, Mushfiqur calmed things down to frustrate the Zimbabwe bowlers for the first time in the series.
The partnership was eventually ended when Shakib gave Elton Chigumbura the charge, only to edge behind to the wicketkeeper.
“Aside from the captain we all gave our wickets away,” admitted Tamim. “My wicket was a disgraceful dismissal — it was a rush of blood to the head, a very stupid dismissal.
“But the match is still very even, so if we can add another 100 runs then we’ll be in a very good position.”
Chigumbura should have had the wicket of Mushfiqur in his next over, but Graeme Cremer’s second dropped catch of the day spared the Bangladesh captain.
Fortunately for Zimbabwe neither drop proved too costly, and Mushfiqur was trapped lbw by Jarvis after adding just four more runs to his total.Advertisement

Nasir Hossain’s reaction to the innings being tentatively poised was to counter-attack, and his unbeaten 37 from only 39 deliveries gave Bangladesh the mental edge at the end of the day.
“Winning the toss, we thought the pitch was going to favour the bowling side more than it did,” said Chigumbura.

“It was a bit soft in the morning, but we didn’t hit the right areas and we weren’t patient enough.”

Scoreboard after the first day of the second test between Zimbabwe and Bangladesh at the Harare Sports Club on Thursday.