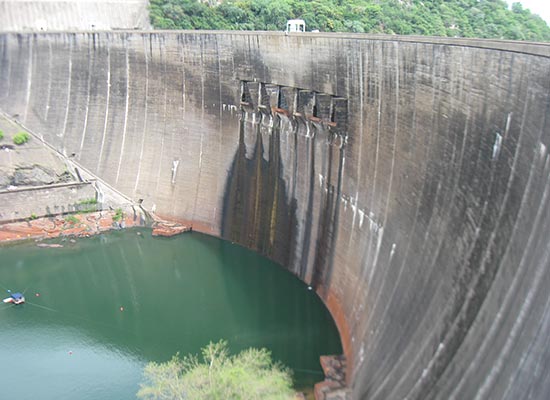 A RACE is under way to prevent one of Africa’s largest dams suffering a catastrophic failure.
The Kariba dam, on the border of Zimbabwe and Zambia, is in danger of collapse because torrents from the Zambezi River pouring through its gates are undermining the bedrock surrounding its foundations.
Engineers estimate that the dam could fail within three years if no action is taken.
Zambian Finance Minister Alexander Chikwanda says the consequences of the dam’s collapse were “too ghastly to contemplate” for the lives and livelihoods of 3.5 million people living downstream.
The repair work is likely to cost $US300 million ($382m).
If the structure suddenly broke, engineers say Cahora Bassa, a large dam downstream in Mozambique, would also be destroyed. Lusaka, the capital of Zambia, would be flooded and southern Africa would lose 1.3 gigawatts of power — about 40 per cent of the region’s hydro-electricity.
The plan to rescue the dam involves delicate negotiation between several international players led by the World Bank and presents one of the continent’s most difficult engineering challenges.
Located 420km downstream from Victoria Falls, the dam, which is 128m high and 579m long, was built between 1956 and 1959 using designs by the Belgian- founded company Tractebel Engineering.
The main part of the rescue plan involves blasting out the granite plunge pool downstream of the dam, which has eroded to 80m, far deeper than expected, to make it longer and wider.
The problem of erosion in the plunge pool was noticed a decade ago but no action was taken.
Several of the floodgates have been jammed shut by a chemical reaction in the concrete wall. This could lead to the plunge pool overflowing if there were a severe flood, putting so much pressure on the dam that the wall would cave in.
To lengthen the plunge pool, about 300,000 cubic metres of rock would have to be blasted away, while protecting workers from the Zambezi using a cofferdam — a temporary barrage from which the water will be pumped.
Work on the plunge pool cannot begin until about May, when the rainy season is over, and is expected to take three years. Work will then begin to mend the floodgates, which is expected to take a further eight years.Advertisement