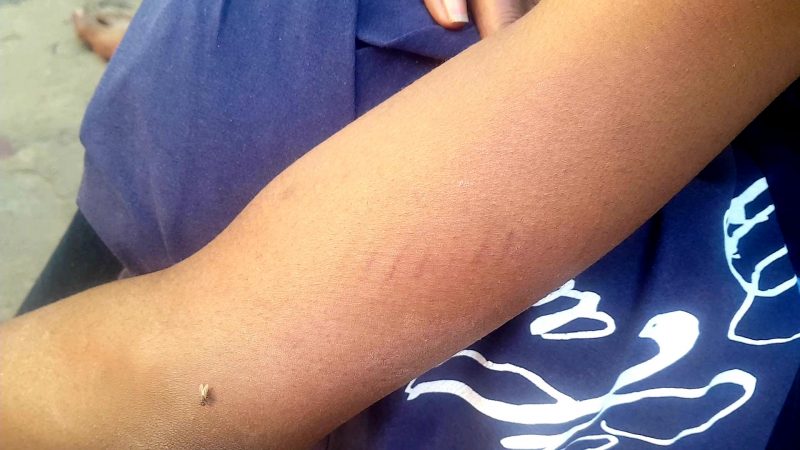 THREE armed soldiers Friday forced their way into a family home in Highfields, Harare and heavily assaulted an 18-year-old male before forcefully taking US$12 and $50 from him as a bribe to stop the beatings NewZimbabwe.com has learnt.

Tadiwa Gwatidzo said Friday his assailants were part of State security agents deployed to maintain peace in anticipation of a national anti-corruption demonstration the same day.

Gwatidzo said when the soldiers came Friday, it was still in the early and he was still asleep when three soldiers kicked open his bedroom door after failing to catch two unidentified men they were chasing.

“They started beating me up with a steel rod all over the body as demanding to know how much I had so that they stop the beatings,” narrated.

“I had US$12 and $50 on me which I put on the floor, which they quickly grabbed and forced me out of my room. All this time, they were beating me until we reached their truck and they left me,” said an emotional Gwatidzo who stays with an aunt in Highfields’ Western Triangle area.

He suffered bruises all over his body.

“If I could bewitch them, I would. I want revenge. There is no law that allows anyone to just get into people’s homes like that and beat them up. If only I had the power to also beat them up I would. It was pure evil by people who are as old as my father.

NewZimbabwe.com arrived at the family residence while neighbours were still consoling Gwatidzo.

“They beat him up for no reason. I am worried because the government said we must stay at home but now they are coming into our homes and beating us up,” said Nyaradzo Mandudzo, Gwatidzo’s aunt.

“The money taken from him was his grandmother’s, instead of depending on the army for protection they have turned into our enemies and we do not even know where to flee to.”