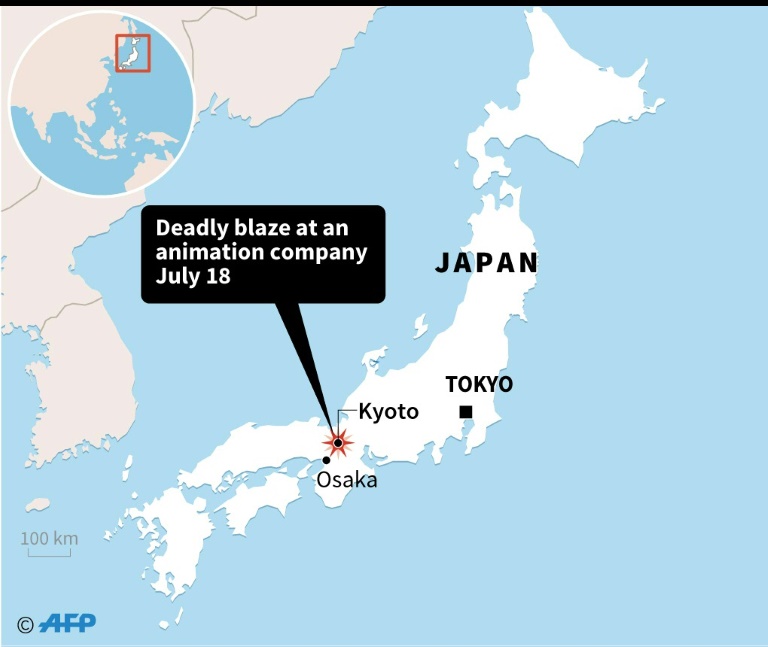 A suspected arson attack at an animation production company in Japan killed 33 people and injured dozens more on Thursday, after a man reportedly doused the building with flammable liquid and shouted “drop dead.”

A motive for the apparent attack remained unclear hours after the blaze. If arson is confirmed, the attack will be among the deadliest criminal acts in decades in Japan, where violent crime is extremely rare.

The fire gutted the three-storey building in the city of Kyoto that housed Kyoto Animation, behind famous anime television productions. The incident sparked an outpouring of support from the industry and fans worldwide, including a viral fundraising campaign.

“Of the 33, two were found on the ground floor, 11 on the second and 20 on the third and also on the staircases that lead to the rooftop,” the official told AFP.

Another 36 people were injured, including 10 in serious condition, he said, adding that all those inside the building during the blaze were now accounted for.

The horrific fire appeared to have been set in the middle of Thursday morning, with the fire department saying they began receiving emergency calls around 10:30am.

“I saw people who were totally black or covered in blood, or who had suffered burns all over their body,” a 53-year-old woman told the Kyodo news agency.

As the fire gutted the building, it sent thick white smoke out through the windows, and the flames charred the facade black before firefighters were eventually able to tame it hours after it began.