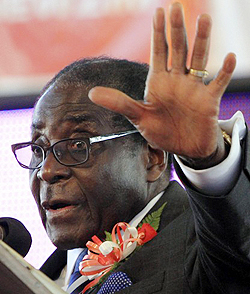 In this article, Bheki Ngubeni forecasts Zimbabwe’s political economy periodicity drawing thoughts from a couple of interval theories. The article finds that the correlation between economic function (the regressor) and maintaining power (the regressand) are the true explanatory/dependant variables in phase processes. Political renovation, therefore, responds more to cyclical timing and less so to entitlement rhetoric.
The 34 year Historical Cycle
NDR, an American research unit advanced a theory demonstrating an interesting cycle of political change based on an economy alternating between a dual personality split between 17 year periods, one of dormancy followed by one of intensity over a repetitive 34 year sequence. Each cycle brings with it a wave of creative destruction, which in turn acts as a change inducing conduit. Authority substitution subsequently emanates from the new disruptive elements.
The issue of the cycle can be illustrated within the Zimbabwean context. Beginning 1980, Zimbabwe experienced considerable economic growth characterised by modern infrastructure, high productivity and low unemployment. Seventeen years later, circa 1997, the economy altered, black Friday set off a downward spiral, post-ESAP realities set in, social unrest in the form of land grabs and incremental outward migration trends developed as the economy weakened.
Fast forward to 2014, and Zimbabwe begins a 3rd wave. According to theoretical rationale, the economy is due a positive transformation. It’s no coincidence the west is gradually lifting sanctions on the 1st year of the third 17 yr periods. At this particular juncture, the true driver of social conscience inherently controlled by those who sell their labour can facilitate a collective reset.
The next question is identifying the momentous disruptive trigger. Will the president retire and make way for new ideas? Are faction wars causing irreparable incumbent damage? Can opposition take advantage?
Actually, it matters not how the supposed prompt comes into effect, any caffeinated event in the short term will initiate a paradigm shift. The reality of interval innovation is forceful to such a point where politicians have to accept new economic realities and adjust momentum accordingly. Advertisement

The Kondratieff Wave
Russian economist, Nicolas Kondratieff hypothesised a scientific theory showing  leadership spans as an inseparable correlative of economic activity known as the “K wave” postulating  that political control  is a direct subservient of economic periodicity. Waves arise from innovation spurts that emanate from earlier economic slowdowns.
In this case, each Zimbabwean K-wave has a distinct characteristic location – Esap and black Friday (late 90s) mass outward migration (2005) & land redistribution (2004), hyperinflation (2008), indigenisation (2009). On close inspection each wave has affected the structure of the country into the future. Each of these events is punctuated by social discontent occasions that lead to previously unseen socio-economic action.
The government has been lucky to side-step the worst effects but the era of entitlement based polices is virtually over. New challenges will demand self-made approaches. A significant relationship exists between periodic waves and the rise and fall of powers. The Kondratieff wave, therefore, is an interesting long-term phenomenon in economics and country politics.
Finance trends in the near future in regards to flow of funds are clear. Our favourite sanctuary, the Chinese card is exhausted to a point where our eastern leverage play recently drew a blank with a failed investment mission. Flirting with Russia will not hold. Putin’s got to contend with a looming OPEC price war eating into forecasted state revenues and South Africa will only anchor our position for so long before we become too heavy a burden.
In the event of the above happening, there is little space to manoeuvre. In a very short space of time, trickle down greed by the connected elite and the foul morals of the marketplace (banks) will culminate into a toxic revelation and destroy the centre or at the very least reform it.
Once entities promote elite pleasure and majority pain, previously passive agents will react, motivated by the economic counterpart of nature. The long wave theory then comes in action, assuming a powerful form that disregards the current shape and brings forth a mind of its own so compelling that it will permanently alter perceptions.
Dodgy leadership, shifty business practices and misinformed thinking will somehow force the subconscious apolitical space into idea generation, not vested interests but survival instincts closely linked to Adam Smith’s invisible hand; that is, a self regulating system that follows certain orderly phase processes produced by an interaction of individuals, unbeknownst to each other with no particular plan in mind but nonetheless evolutionary. Based on recent events, Zimbabwe is at that point of change.
Bheki Ngubeni (BA, MSC) can be reached at bheki213@yahoo.co.uk