A RECENT research conducted by the National Association of Youth Organisations (NAYO) shows 35% of residents in the dormitory town of Chitungwiza were swindled by land barons losing millions of dollars in the process.

The report released last week shows 79% of the respondents know of someone who was tricked into buying unavailable land by the barons.

The survey looks at how residents interact with land barons – individuals or corporate entities that are involved in corrupt land dealings that the end-buyer in possession of illegal land facing eviction. 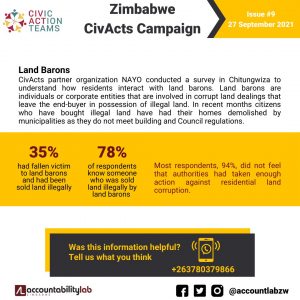 “Most respondents, 94% did not feel that authorities had taken enough action against residential land corruption. In recent months, citizens who bought illegal land have had their homes demolished by municipalities as they do not meet building and council regulations.”

According to NAYO, 69% of residents in the sprawling town were concerned about being defrauded their hard-earned cash by the politically connected land barons while 57% of the residents were worried by the rise in corruption involving illegal land sales.

At least 94% of the respondents felt no investigations were being done by the state to bring the culprits to book despite the creation of the Zimbabwe Anti-Corruption Commission (ZACC), and the Special Anti-Corruption Unit (SACU) in President Emmerson Mnangagwa’s office to stop corruption.