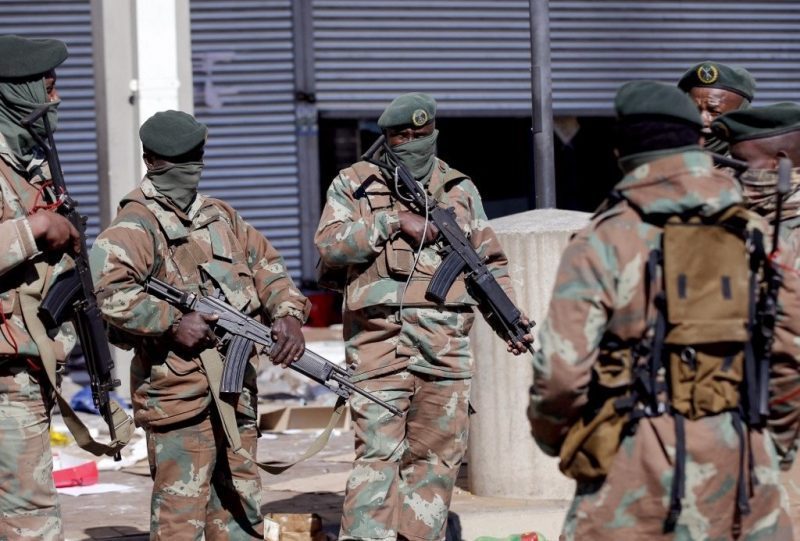 Among the dead is a metro police officer.

Over 800 people have been arrested as the protests that turned violent over the weekend with rampant scenes of looting reported in KwaZulu Natal, Gauteng and Free State provinces.

Zuma was sentenced to 15 months in prison after he was convicted of failing to attend an inquiry into corruption during his presidency.

On Monday, President Cyril Ramaphosa deployed the military to quell the protests, but on Tuesday morning the law enforcement agencies were failing to contain the protests and looting as the citizens took to the streets and targeted shops and warehouses that had not been looted.

In Gauteng province, 19 people were reported dead with 10 killed in a stampede in Soweto as violent protests and looting continued.

In KwaZulu-Natal Premier Sihle Zikalala said some 26 people had been killed in the province, including a 15-year-old boy.

“This is destroying everything we had been building. The progress we had made in the economy is being reversed by this looting, destruction and shutting down. The looting has to stop,” Gauteng premier David Makhura said after visiting Soweto.

The metro police officer died after responding to mass looting at Sam Ntuli Mall in katlehong at around 9:30 pm Monday.

“Protestors were flooding the mall when criminals opened fire on them while they were monitoring the situation and trying to maintain law, order, peace, and stability in the area,” a police spokesperson said.

“The ambulance couldn’t get to the scene. Alternative means were made to get him out, but he succumbed en route to hospital.”

Police Minister Bheki Cele told journalists Tuesday that, if looting continued, there was a risk the country could run out of basic food.

However, Defence Minister Nosiviwe Mapisa-Nqakula said there was not yet a need to declare a state of emergency over the violence.

But Cele warned that “no amount of unhappiness or personal circumstances from our people gives the right to anyone to loot, vandalise and do as they please and break the law”.

He revealed they were investigating 12 people for inciting violence.

There has been some concern over fake news online fuelling the unrest, while the governing African National Congress (ANC) had already revealed it was looking into tweets sent by Zuma’s daughter, Duduzile Zuma-Sambudla.

“She will have to answer and explain what her tweets mean and where they’re going to lead to,” Jesse Duarte, the party’s deputy secretary-general, said.