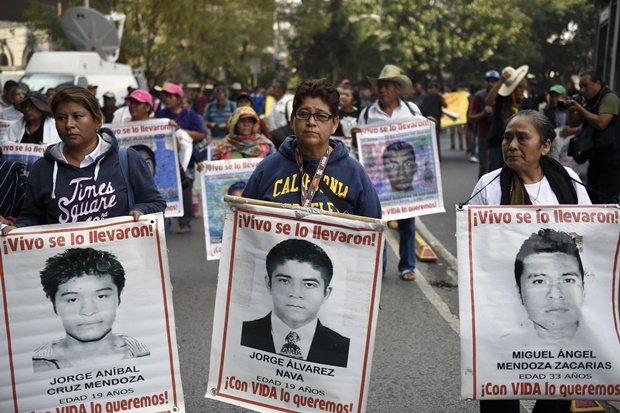 Students and relatives of the 43 students of the teaching training school in Ayotzinapa who went missing on September 26, 2014, protest ahead of the fifth anniversary of their disappearance, in Mexico City.
Spread This News

Five years ago on Thursday, 43 students in southern Mexico who were on their way to a protest were detained by corrupt police who handed them over to drug-cartel hitmen.

Then they disappeared without a trace.

Half a decade later, Mexico is still haunted by “the 43”, a case that drew international condemnation and stained the government of ex-president Enrique Pena Nieto.

The investigation has been marred by allegations of official incompetence or even corruption. Misconduct – especially the use of torture to extract supposed confessions – has resulted in the release of 77 detainees, including the main suspect earlier this month.

The new prosecutor general has meanwhile announced plans to reinvestigate “almost from scratch”.

But it is uncertain whether the world will ever know what happened to the young men from the teacher training institute in the rural village of Ayotzinapa, in the violent state of Guerrero.

“I don’t think (a new investigation) will achieve a radically different result from the original,” said Alejandro Hope, a security expert and former Mexican intelligence officer.

“There are two facts that don’t seem to be in doubt: The students were kidnapped by police and handed over to the Guerreros Unidos cartel.”

What happened after that, he said, might remain a mystery forever.