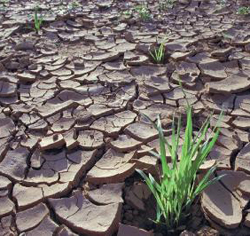 A TOTAL of 90 000 small holder farmers in Manicaland are set to benefit from a $4m Climate Change Adaption project which is being funded by the UNDP and Global Environmental Facility (GEF).
The project, which will focus on rural livelihoods in the districts of Buhera, Chimanimani and Chipinge, seeks to scale up adaptation measures that reduce the vulnerability of rural communities, particularly women small holder farmers.
The project is expected to run for 48 months (Nov 2014-October 2018).
In an interview with NewZimbabwe.com during the project launch in Mutare last week, Oxfam Country Director Jan Vossen said one of the most severe risks that Zimbabwe is facing is the negative impact that climate change risks have on agriculture.
He said rural communities were vulnerable and “climate change is a reality that is here to stay with us for a long time”.
“We will have to accept that increasing frequency of climate extremes, particularly drought and heavy rainfall events, coupled with shifting rainfall patterns are additional stressors which will cause severe risks to our economy and to the livelihood of thousands of Zimbabweans,” said Vossen.
He added that a fragile ecology, population pressure and a degraded natural resource base have left rural livelihoods vulnerable to the risk of climate change.
“Climate Change Adaption therefore has to be high on the strategic agendas of the government and its developmental partners,” said Vossen.
He said Oxfam and its regional partners have developed the Southern Africa Food and Climate Justice Campaign as a way to fight hunger and vulnerability in the face of climate change.
“We want to secure the right to land tenure and access to productive natural resources like water and access to seeds for small holder farmers with a special focus on women farmers. We all know that female small holder farmers are the backbone of our rural and agricultural economies,” said Vossen.
He said small holder farmers provide 80 percent of Africa`s food with 75 percent of those being women.Advertisement