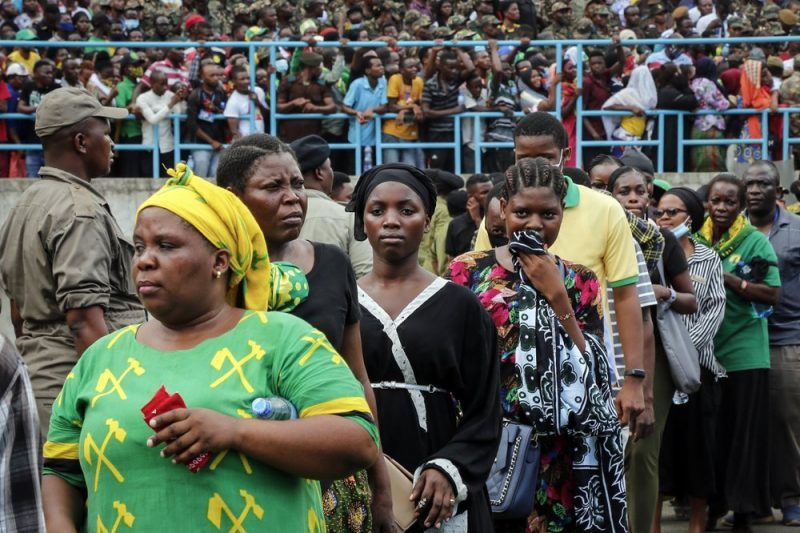 Mourners queue to pay their respects as the body of former president John Magufuli lies in state at Uhuru stadium in Dar es Salaam, Tanzania
Spread This News

NAIROBI, Kenya (AP) — Five people, including four children, died in a suspected stampede during a public viewing of the body of former Tanzanian President John Magufuli over the weekend, as regional leaders joined Tanzanians to pay their last respects to the controversial leader.

Magufuli was one of Africa’s most prominent Covid-19 skeptics and even though his government announced that he had died of a heart failure on Wednesday, opposition leaders and his critics charge that he died of complications from Covid-19.

Tens of thousands of Tanzanians came out to view Magufuli’s body at Uhuru Stadium in the country’s largest city, Dar es Salaam, over the weekend.

Suzan Mtua, 30, died with four school-age children from the same family when there was a stampede of people wanting to view the body Sunday, Heri Mtua, a family spokesman, said.

“The children had demanded they also attend the funeral of President Magufuli,” he said. “Later that day we received a call late evening by an unknown person using Suzan’s phone.” The caller said that the owner of the phone had been taken to a hospital. But her body was eventually found at the morgue, he said.

The children were aged between 7 and 12 years.

Hundreds of peoples who attended the funeral fainted in the crush and authorities said they will issue a statement on Tuesday about the number of people killed in the national event.

President Samia Suluhu Hassan, who was Magufuli’s vice president and succeeded him, was joined by nine African heads of state on Monday for Magufuli’s state funeral.

Among them were Kenya’s President Uhuru Kenyatta, Cyril Ramaphosa of South Africa, Felix Tshisekedi of Congo and Filipe Nyusi of Mozambique, Lazarus Chakwera of Malawi, Azali Assoumani of Comoros, Emmerson Mnangagwa of Zimbabwe, Edgar Lungu of Zambia and Mogkweetsi Masisi of Botswana.

“We mourn the loss of our friend, our brother, a hard worker,” Kenyatta, chairman of the regional bloc East African Community, said.

“He showed us that, as Africans, we have the potential to liberate ourselves from dependence on foreigners. That we have potential as Africans to manage our economies and ensure that our people get justice,” he said.

Magufuli had been missing from public view since Feb. 27, when he swore in a new chief secretary after his predecessor died with what many speculate was Covid-19. For days, government officials denied he was ill claiming he was busy and the president is not duty-bound to make public appearances.

Magufuli will be buried on Friday.