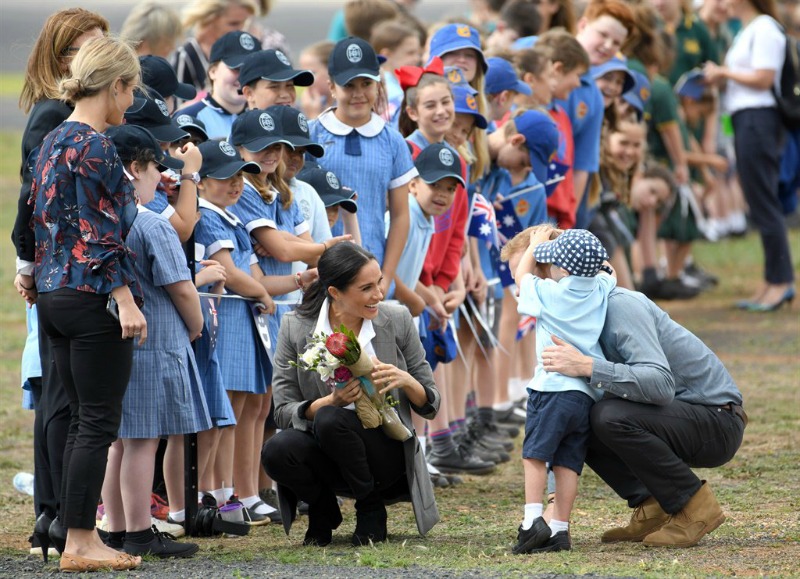 Royal protocol went out the window on Tuesday as Prince Harry allowed an adorable young fan to rub his beard during the last leg of his and Meghan Markle’s tour of Australia.

The royal couple were visiting Dubbo in New South Wales just days after announcing that they’re expecting a child of their own – and they were greeted by more than 30,000 fans, according to The Guardian.

Onlookers were treated to a tear-jerkingly adorable moment when Meghan and Harry met five-year-old Luke Vincent who dived straight in for a hug with the Prince.

Luke’s teacher said he “didn’t give [Harry] any choice” in the matter, according to the BBC.

Traditional etiquette suggests you shouldn’t touch a member of the royal family, and you should even wait for a royal to offer you their hand before engaging in a handshake.

It’s “best not to initiate personal physical contact with a member of the royal family,” Lucy Hume, associate director of British etiquette bible Debrett’s, told Reuters in May.

But that didn’t stop young Vincent from going a step further to rub Harry’s beard, which he seemed entranced by.

“Luke’s favourite person in the world is Santa Claus, who has a beard. So he rubbed Harry’s beard,” school principal Anne Van Darrel told 7 News Sydney.

“[We were told] no touching. Definitely, I was very concerned once he started rubbing Prince Harry’s face and his hair but Prince Harry was completely gracious and so polite and realised what was happening with his infatuation with his beard.

“We can only thank him so much for treating Luke with such respect.”

Vincent also treated the Duchess of Sussex to a warm hug after handing her a bunch of flowers.
“I know that the school was watching it back here and there wasn’t a dry eye back in the school,” Van Darrel added.

Ironically, the royal couple were in Dubbo to discuss the droughts that had plagued that region – but the heavens opened and they were soaked by torrential rain.

“We know that suicide rates in rural and remote areas are greater than in urban populations and this may be especially true among young men in remote regions,” Harry said according to the Guardian.

“But, outside all of that, here’s what I also know. You are one huge community and with that comes an unparalleled level of internal support and understanding.”

The Duke and Duchess are in Australia for the rest of the week before jetting off to Fiji, Tonga, and New Zealand to round off their first royal tour since marrying in May.