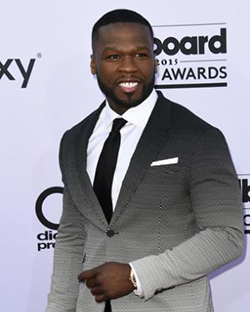 RAPPER 50 Cent was ordered Friday to pay another $2 million to a woman over a sex tape, despite his pleas that he was short of cash.
A jury announced that it was imposing the amount in punitive damages against 50 Cent, bringing to $7 million the total amount he has to pay over the case.
The Florida-based woman, Lastonia Leviston, said she felt vindicated after the decision of the jury in New York.
“I hope he learned a lesson,” she was quoted saying by the Daily News.
A video that went online in 2009, depicted Leviston in sex acts that were narrated by 50 Cent, who disguised himself in a wig and spoke in an artificially high voice to portray his character “Pimpin’ Curly.”
50 Cent, whose real name is Curtis James Jackson III, used the video to mock fellow rapper Rick Ross, who was formerly in a relationship with Leviston.
50 Cent apologised in court and argued that he was not responsible for the video.
After the first set of damages, he filed for bankruptcy protection, saying his liabilities and assets were in the same range.
The “Get Rich or Die Tryin'” rapper testified that his lavish lifestyle was all a facade and that he borrowed the fancy cars and jewelry that he showed off in public.
The $2 million in punitive damages, however, is less than the $15 million in additional compensation sought by Leviston’s lawyers.
The initial $5 million had been half damages for violating Leviston’s civil rights and half for intentionally inflicting emotional distress.
Forbes magazine estimated earlier this year that 50 Cent was worth $155 million, having made $100 million in 2007 by selling his stake in energy drink VitaminWater.
50 Cent, who lives in a Connecticut mansion once owned by boxer Mike Tyson, told the court he was worth $4.4 million.
Last year he was ordered to pay $16 million on charges of spreading trade secrets of headphone maker Sleek Audio.Advertisement