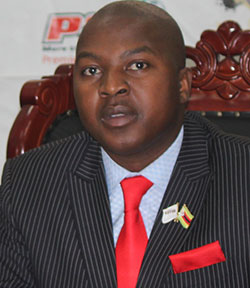 THE 2014 edition of the Mbada Diamonds Cup, worth US$250,000 in total sponsorship, will only involve the top four teams at the end Castle Lager Premier Soccer League season.
Winners of the competition will take home $50 000, runners up $30 000 while the two losing two semi-finalists will go home with $15 000 each, organisers of the competition announced in Harare on Tuesday morning.
The other 12 teams that will not take part will get $10 000 each.
The first two editions of the tournament were won by Dynamos in 2011 and 2012. Highlanders won the 2013 version, but are in danger of losing out if current form, where they have lost two consecutive matches, is anything to go by.
Dynamos are leading the standings with six games to go and have 46 points, while newly promoted ZPC Kariba are in second place with 44 points. Caps United are third with 42 points while Highlanders are fourth on 39 points.
Hwange are fifth on 38 points with FC Platinum (35), Chicken Inn and Harare City (34) and Buffaloes on 33 points, also in the race.
Mbada Diamonds corporate services executive George Manyaya said the revising down of the budget, from the initial $1 million they have spent in the last three editions, was due to, among other factors, the difficult operating environment.
“We are concentrating on balancing our efforts in enhancing our operational capacity and efficiency as well as fulfilling our normal CSR investment thrust,” Manyaya said Tuesday.
“The current environment poses its own operational challenges, which have affected us as a corporate and cumulatively, our stakeholders.
“Our strategic thrust for 2014 is to heavily invest into mining of deep seated conglomerate kimberlitic material which requires an extensive capital outlay. As a result, we embarked on major cost cutting initiatives that have seen reducing budgets in all facets.
“It is against this background that the 2014 edition of the Mbada Diamonds Cup comes in a different but more exciting format which we believe will make a bigger impact on the standard of the competition.”
He said although just four teams would fight for the Cup, all the teams in the premier league would still benefit.
“The other 12 teams will not participate this year but as a corporate we are aware of the expectations to participate and as a token we have agreed with PSL that each team will receive US$10 000 while the PSL will get its normal administration token,” he said.Advertisement

“This is a token to the parties that should have taken part in the 16 team knockout tournament.
“We could have easily split the prize monies and said the winners get for example US$150 000 and maintain the richest tournament tag but (we decided that) big or small, the cake must be shared and thus we reduced the number of matches and not the number of beneficiaries in a bid.”

The dates and venues for the games would be decided by the PSL and Manyaya appealed to the league to ensure that the tournament remains affordable for all football fans.
“The football fan remains a very close part in the Mbada Diamond’s heart and deserves entertaining football which is also affordable thus we plead that the US$1 rates are maintained.”
Manyaya also reaffirmed his company’s commitment to continue supporting football in the country.
“Mbada Diamonds remains committed to its corporate social responsibility programmes and this year, the Mbada Diamonds Cup, is a big part of the cocktail of our programmes that we roll out, year in and year out, to strengthen the bond that binds us with the communities in which we operate in,” he said.
“We have always believed that football is a big part of who we are, as a nation, and that is why, as and when we have been able to extend our hand to boost the national game, we have not hesitated to do so and, since we plunged into a marriage with our football three years ago, we are proud to say that we have been a big part of its soul.”