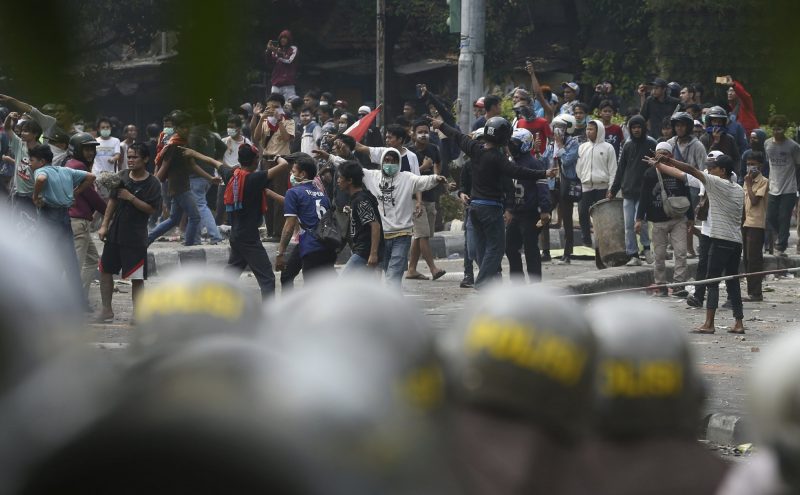 Supporters of the losing presidential candidate clash with police Wednesday, May 22, 2019, in Jakarta, Indonesia.
Spread This News

Indonesian President Joko Widodo said authorities have the volatile situation in the country’s capital under control after six people died Wednesday in riots by supporters of his losing rival in last month’s presidential election.

The clashes began Tuesday night when supporters of former Gen.

Prabowo Subianto tried to force their way into the downtown offices of the election supervisory agency and have continued unabated since then.

More than two dozen vehicles were burned as rioters took over neighborhoods in central Jakarta, throwing rocks and Molotov cocktails at police who resFlanked by the military chief and other top leaders, a grim-looking Widodo said, “I will work together with anyone to advance this country, but I will not tolerate anyone who disrupts the security, democratic processes and unity of our beloved nation.”

Subianto, an ultra-nationalist politician, has refused to accept the official results of the April 17 election and instead declared himself the winner.

The Election Commission on Tuesday said Widodo, the first Indonesian president from outside the Jakarta elite, had won 55.5% of the vote, securing the moderate technocrat a second term as leader of the world’s most populous Muslim-majority nation. Subianto, an elite figure from a wealthy family connected to former dictator Suharto, also lost to Widodo in 2014.

He has made four unsuccessful bids for the presidency since Suharto was ousted in 1998.ponded with tear gas, water cannons and rubber bullets.