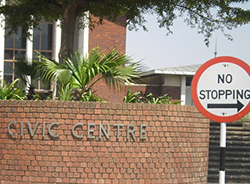 MUTARE: About sixty percent of home-seekers here paid bribe to city council official to access land, Transparency International Zimbabwe (TIZ) has said.
This came out during a corruption dialogue recently held in the city to discuss sleaze in the allocation of land.
TIZ researcher Farai Mutondoro said there is need for computerisation of the land registry system to curb corruption.
“There is need for digitalisation of the land registry system after discovering that 60 percent of local people paid bribes to local authority officials to access land,” said Mutondoro.
He said more people were moving to urban areas, creating a huge demand for land and thus opportunities for corruption.
“If you move around the city, transition houses have been erected as people can no longer afford rentals,” the TIZ official said.
“Statistics reveal that 3.2 percent of people moving to urban areas annually. Due to economic hardships, most people want cheap land so if we digitalise land systems like passports, marriage certificates land corruption will go down.”
Mutondoro said there was need for information disclosure on how to purchase land, adding that this should be done transparently to avoid a situation where people buy the same sizes of land at different prices.
“Accountability is lacking. That is why we (TIZ) have embarked on the Land and Corruption in Africa project which is running in the country and other four countries in region.”
The project is expected to help improve the livelihoods of poor people who are being fleeced by council officials and cooperatives.
Meanwhile, Mutare Residents and Ratepayers Association Coordinator, David Mutambirwa, said corruption has become so rampant in the allocation of land.
“Government should put in place financial management programmes on housing projects to help curb corruption.
“Housing crisis has contributed to massive corruption in the city and there is need for action by relevant authorities,” said Mutambirwa.
A number of desperate home seekers in involved with the Gimbok and Federation housing cooperatives have reportedly been fleeced of their hard earned cash by land barons.
Most inhabitants of those areas are living without access to clean water and ablution facilities, exposing them to waterborne diseases such as typhoid and cholera.Advertisement