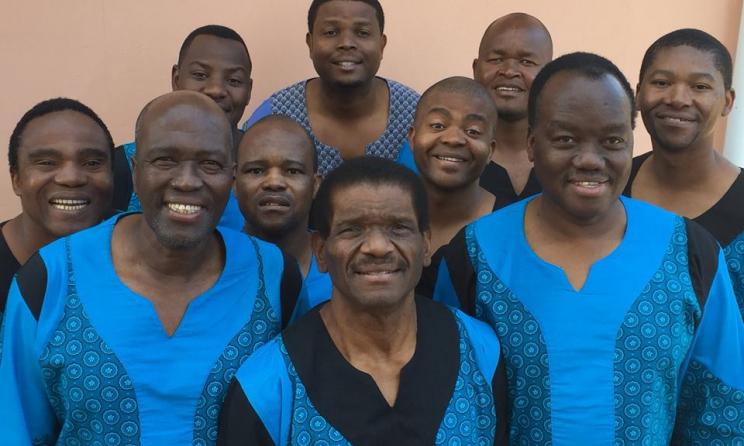 CLEVELAND: Ladysmith Black Mambazo is the quintessential example of family entertainment, and that makes sense.

After all, leadership of the group formed by Joseph Shabalala in South Africa in 1960 now has been passed down to his sons. So in essence, it’s family entertainment from a family business.

So says Albert Mazibuko, a spokesman for the group that plays the Music Box Supper Club on Wednesday, Feb. 28, and a member since its founding. The band first came to American attention as the backing vocals for Rock & Roll Hall of Famer Paul Simon’s epiphanous 1986 album “Graceland.”

And that family focus is one reason for the multiple Grammy winners’ latest album, “Songs of Love for Kids & Parents Around the World.”

“It came up with the young guys in the group,” said Mazibuko in his sing-songy, Zulu-accented voice in an early evening call to his home in South Africa. “Joseph retired in 2014 and handed over to his four sons to lead the group jointly.”

Thulani, Thamsanqa, Sibongiseni and Msizi Shabalala opted to do the children’s album “to honor their father,” Mazibuko said.

“These are not new songs,” he said. The idea was to take songs people already love, songs “that have a message for the people,” and sing them.

“We chose the songs because of the message the songs had,” Mazibuko said. The group wanted to “take songs of peace and love” and use them to promote those ideas in an album aimed at children.

“When those people grow up, they will have in their mind that living in peace with other people is a good thing,” he said.

Most of them are African songs, but there’s one that’s instantly recognizable to American audiences – a Zulu version of “Old McDonald.”

“It’s because this is a song that when you are singing it, as children they get it easily,” Mazibuko said. American children know the tune and sing along in English, adding a huge sweetness factor that turns it “into a different song.”

But even that song is about innocence and trying to make a social difference.

“That was Joseph’s idea from the beginning,” said Mazibuko, noting that the band’s rise to fame occurred during – and in spite of – the racial blasphemy known as apartheid, instituted in South Africa beginning in 1948.

“I remember when he came to me in 1969 and he said, ‘My brother, I want to write the songs that empower people and our people strong and bring peace to our country.

” ‘With our music, we can unite our people and bring them together,’ ” Shabalala told Mazibuko. “We can give them hope that if they work together, it would bring out what is good in them.’ ”

Best of all, Mazibuko believes his friend and kinsman’s experiment has worked.

“I grew up in that [apartheid] time,” he said. “Compare that with now and it’s a great achievement for South African people.”

What may seem incredible or disingenuous to some in this country is that even today, Mazibuko, his countrymen and even the world are jealous of the life we all have in the United States.

“America is a country that everyone is envious of,” he said. “All over the world, we wish we could be like this country, and I think those who are ruling it right now should remember that.”

And though many in the country are pessimistic in the wake of recent events and the vitriol spewed by all sides in the ongoing disputes and political discourse on social media, Mazibuko remains optimistic.

“They will find a way,” he said, confidence and hope oozing from his voice in equal amounts. “The leaders will find a way to bring that beauty that we see from the outside.”