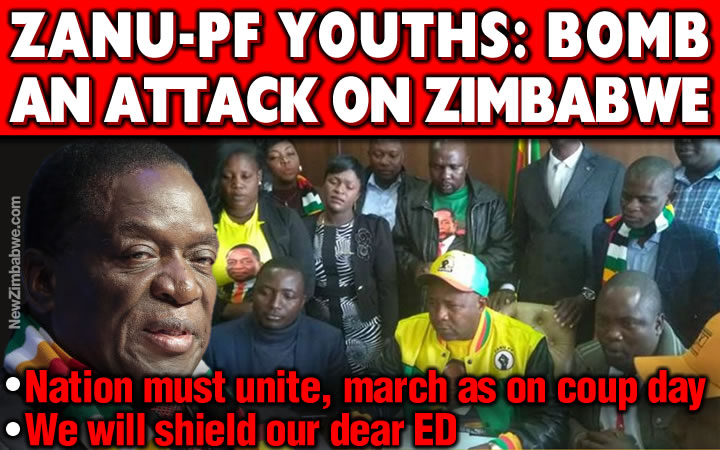 FOLLOWING a bomb blast at the ruling party’s campaign rally Saturday in Bulawayo from which President Emmerson Mnangagwa escaped unhurt, Zanu PF youth wing said they were offering themselves as human shield to protect their leader.

The blast which occurred as the party leaders were leaving the VIP tent at White City Stadium has so far claimed two lives with 49 others injured including members of the state owned Zimbabwe Broadcasting Corporation news crew.

Addressing a press conference at the party’s headquarters in Harare Tuesday the youth wing national chairperson Pupurai Togarepi said the incident meant that their approach has completely changed going forward.

“Zimbabwe is under attack from messengers of darkness; terrorism cannot be condoned by right minded Zimbabweans,” said Togarepi.

“This is not an attack on one political party but on Zimbabwe and we call upon all the youths in Zimbabwe to be vigilant.”

He added, “Let’s come together in our various political, social and religious groupings to demand a stop to this satanic attack to our peace.”

The youth boss went on to say that citizens must come together as they did in November last year when the military tankers rolled into the streets of Harare leading to the fall of former president Robert Mugabe after 38 years in power.

The coup was followed by a massive street march in solidarity with the military.

Togarepi also said that efforts must be put together in hunting down the bombers together with their sponsors.

“It is in this light that we join other progressive organisations and associations in calling for the judicial and executive arms of our state to bar political parties from inviting school children to their political gatherings, a development which has gone unabated over the past years,” said Leopold Munhende, CCDZ communications manager.