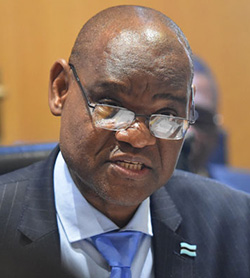 THE Bank of Botswana (BoB) says it anticipates the inevitable turn-around of the Zimbabwean economy to positively impact Botswana.
BoB said this after President Emerson Mnangagwa invited local businesses to explore growth opportunities in the ‘new Zimbabwe’ at the Botswana-Zimbabwe Business Forum held at the Gaborone International Convention Centre (GICC) this week.
Mnangagwa was on a two-day state visit to Botswana.
Speaking at the Monetary Policy Committee (MPC) meeting media briefing Tuesday, BoB Governor Moses Pelaelo said local companies and businesses are well placed to reap rewards from the anticipated regional growth, especially in regards to the new Zimbabwean regime.
“Botswana’s manufacturing landscape comprises of several companies with Zimbabwean shareholding, the majority operating in the timber and sugar packaging industries,” industry minister Vincent Seretse said at the opening of the Business Forum.
Seretse also said the companies have, over the years, invested around P132 million in Botswana with an estimated annual turnover of P392 million and have employed around 436 permanent employees while an additional 436 were employed on a part-time basis.
“You will note that the above figures exclude one of the largest investments with Zimbabwean shareholding, in the mobile telecommunications sector,” said the Minister.
Seretse further noted that the Double Taxation Avoidance Treaty between the two countries, which was signed on June 16, 2004 and ratified by Botswana on August 3rd, 2004 will facilitate cross-border value chain linkages and Joint Venture partnerships.
“Botswana has since proposed to amend Article 25 of the Agreement to align it with internationally agreed standards on transparency and exchange of information for tax purposes, and the amended agreement will be signed later this year.” Minister Seretse said.
This article is taken from The Voice.Advertisement