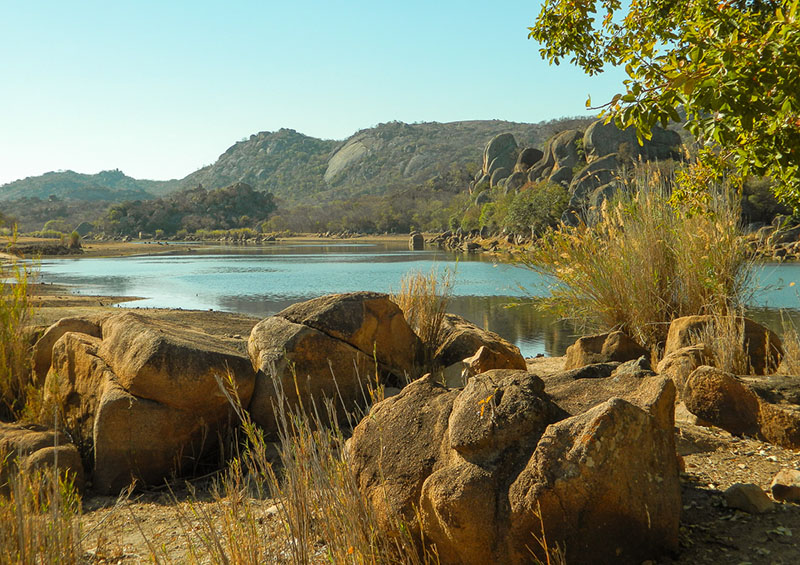 By Joshua Hammer I Hamilton Spectator

JOHN Brebner swept his binoculars over a fissure-ridden rock face that towered over a grove of acacia trees. Candy-coloured striations of dolomite and quartz ran through the tan granite, and human figures painted by Khoisan Bushmen three millenniums ago were faintly visible on the facade.

“There it is,” Brebner exclaimed, passing the binoculars to me. “Look through these and you will see the sticks quite clearly.”

I moved the binoculars up and down the cliff, until I zeroed in on a horizontal crevice, speckled with bird droppings, called whitewash. Inside the opening was a striking sight: a huge, almost spherical bundle of twigs and branches, balanced on a precipice.

“That’s a fairly new eagle nest, only six or seven years old,” Brebner told me. “There’s one in the park that’s been here for 38 years.”

Brebner, a genial ex-cattle farmer whose grandfather settled in Rhodesia, now Zimbabwe, at the turn of the 20th century, was leading me through Matobo National Park, a 163-square-mile wilderness 20 miles (32 kilometres) south of Bulawayo. Formed some 3 billion years ago, when magma buried deep beneath the earth’s surface cooled and then eroded, Matobo is one of the world’s geological oddities: a vast field of granite domes, oval-shaped extrusions known as whalebacks, and blocks of broken granite called castle kopjes. Between the outcroppings lie swampy valleys, or vleis, fed by rainwater run-off and rich in acacias, mopanis, figs, euphorbias and other vegetation.

This combination of towering rock formations, some of them hundreds of feet high, and thick forests has made Matobo an ornithologist’s paradise. Eagles, hawks and falcons — among the greatest concentration of birds of prey in the world — nest in tall trees or on rock ledges protected from baboons and other predators, and feed on both yellow spotted hyraxes and rock hyraxes, known locally as dassies.

All told, the national park, which was created in 1926, partly from farmland bequeathed by Cecil John Rhodes, the founder of the British South African Co., which colonized Rhodesia, has more than 400 varieties of birds, ranging from southern ground hornbills to black storks to mocking cliff chats. In recent decades, thanks to the efforts of Zimbabwe Parks and Wildlife Management Authority — one of the few functioning institutions in this country — the park has also become a sanctuary for leopards, antelopes and a robust population of white and black rhinos.

But it was the birds of prey that I had mainly come to see. Over the past six months I have been researching a book that deals in part with Jeffrey Lendrum, described by British police as one of the world’s most prolific wildlife thieves and smugglers.

Raised in Bulawayo in the 1970s at the height of the Rhodesian bush war that brought guerrilla leader Robert Mugabe to power, Lendrum began climbing into Matobo’s hard-to-reach nests as a boy. He would later turn his agility and ornithological expertise to controversial ends, roaming from Tierra del Fuego, Argentina, to northern Quebec, and snatching the live eggs of wild falcons — reportedly on behalf of wealthy Arab falconry enthusiasts. (Lendrum was convicted of stealing eggs in Britain in 2010 and in Chile in 2015, and served time in prison, but insists he did it to save falcons that would otherwise have perished in the wild.)

In the course of my reporting I have begun tracing Lendrum’s footsteps around the world, viewing the aeries of peregrines in the Rhondda Valley in Wales, and flying with a falcon in a hot-air balloon in Dubai. Now I had come to southern Africa see where his journey had begun.

Brebner and his wife, Jen, another bird enthusiast, picked me up at my guest cottage in Bulawayo in their four-wheel-drive vehicle, and we headed down a two-lane tarmac road toward Matobo. It was just two weeks after the military coup that had unseated Mugabe after 37 years in power.

“The roadblocks are gone now,” Brebner said, referring to the ubiquitous checkpoints that had appeared in the last two years of Mugabe’s rule.

Desperate police officers, he explained, had extorted cash from drivers to replace their unpaid salaries.

The co-coordinator for the past seven years of the African Black Eagle Survey, one of the world’s long-running ornithological studies, Brebner has spent hundreds of hours in Matobo, observing the mating, nesting and fledging of this coal-black raptor. Also known as Verreaux’s eagle (Aquila verreauxii) after Jules Verreaux, a naturalist who collected specimens in the early 19th century for the French Academy of Sciences, the raptors start breeding at age 4 and can live to 35. Each female produces two eggs in a clutch, and, upon hatching, one chick invariably kills the other, a brutal act of self-preservation known as “Cain-and-Abelism,” documented by the Black Eagle Survey decades ago.

Today, there are 30 pairs of black eagles in the park, Brebner said as we entered Matobo through the main gate and followed a dirt track through the bush. It was our mission this morning, he announced, to spot a pair.

“During nesting season (June and July) the birds are everywhere,” Brebner said. “But now we’ll have to strain to see them.”

We drove deeper into the park through acacia groves and rolling grassland, spotting baboons, klipspringers, reedbucks and warthogs along the road. The Brebners peered into the tops of trees and the cloud-dappled sky, trying to find birds of prey.

“Jen’s got very good eyes, but mine are too old,” Brebner said.

“It’s a gymnogene — an African harrier hawk,” she said, delighted by our first sighting of the morning.

We continued for another few miles, arriving at a tawny cliff, perhaps 200 feet (60 metres) high, riddled with ledges and crevices: ideal nesting territory. And then, with a shout, Jen Brebner gestured upward. Peering through binoculars, I quickly spotted two large, jet-black raptors soaring in tandem above the sheer granite wall: a mating pair of black eagles. “Do you see the white ‘V’ on their backs?” John Brebner asked. “That means they’re mature — about 6 years old, I think. The bigger one is a female. You can only tell the difference by size.”

I watched the yellow-beaked birds glide and alight on rock ledges, marvelling at their sleek forms and effortless flight. It was such a sight that had captivated the young Lendrum 40 years ago. I realized, though, that the unusual career path he had followed had made him an enemy of conservationists and wildlife police around the globe. For half an hour the Brebners and I followed the eagles on their hunt for hyraxes. Then we got back in our four-by-four and continued down the track, as the raptors dove behind the granite cliffs and disappeared from view.