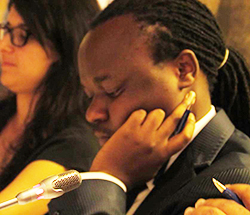 The man credited with most work in the gravitational field field is Sir Isaac Newton who was himself a believer. He never made this outrageous claim of linking the bible to his work. Even when scientists are believers, they do not take that belief into the laboratory because it is not a scientific book.
THIS paper is a response to the article “Atheism: Hard Evidence in Support of a Creator” by Learnmore Zuze (hereinafter referred to as ‘the author’).
It must be pointed out from the outset that attempting to provide hard evidence in support of a creator is an exercise in futility. Faith is the strong belief in God or in the doctrines of a religion based on spiritual apprehension rather than proof. Hard evidence would be dispositive of the need for faith. A leap of faith is necessitated by the absence of factual support. It is beyond dispute that no one believes in a creator except within the bounds of faith. Thus the attempt to provide hard evidence for a creator was always going to produce weak results at best.
However, a distinction must be drawn between assessing evidence to find the best possible explanation for it and claiming to already have an answer but defending it in light of the existence of scientific fact. The latter seems to have been the method adopted by the author. That is to say, he sought out information to confirm his preconceived notions of the origins of the universe. This makes his article a simple exercise in confirmation bias.
Whilst many scientists are religious, none would ever come close to making the outrageous claim that faith has led them to scientific discovery. For this reason, technological innovation is primarily located in secular parts of the world as there is no religious intervention in the laboratory. (see the Global Innovation Index led by such countries as Sweden, Switzerland, and Finland).
This unlettered suggestion that there is a link between science and religion is disproved by the fact that the Bible believing regions of the world are not the hubs of scientific advancement. To the contrary, they tend to be shackled by the rustic and outmoded fatuity of superstition. This is why the bottom fifty countries in UN’s Human Development Index are unwaveringly religious. Religion has long fought scientific innovation and advancement (from the days of the indictment of Galileo) as the idea of a deity has shrunk to what Astro Physicist Neil de Grasse Tyson calls “ever decreasing pockets of scientific ignorance.” I now turn to the contents of the article by the author:Advertisement