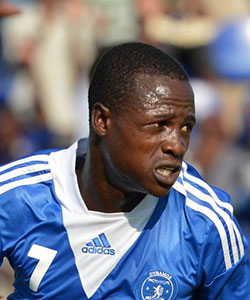 THE Independence Trophy replay between Dynamos and FC Platinum is set to be staged on Heroes Day in August due to a congested Castle Lager Premier Soccer League calendar.
Saturday’s final between the two giants was called off at the muddy National Sports Stadium due to bad lighting after Zesa cut off power after 64 minutes of player when Dynamos were leading 1-0 through a Ronald Chitiyo goal in the 16th minute.
Referee Pedzisayi Chadya, match commissioner Lovemore Marange and the two captains Augustine Mbara (Dynamos) and Thabani Kamusoko (FC Platinum) agreed that the match could not go ahead due to bad light and it was called off.
Zifa spokesman Xolisani Gwesela said a decision would be made later, but hinted at a replay later in the season.
“A decision will be made after all consultations have been made, but it’s clear the match did not end  due to bad light and under such circumstances a replay would be in order,’ he said on Sunday.
FC Platinum returned to Zvishavane on Sunday morning, but are due back in the capital on Wednesday for a re-arranged match against Harare City.
Dynamos coach David Mandigora has expressed regret at the abandonment of the tie.
“It is unfortunate that action was stopped because of bad lighting. We were looking for a second goal to kill the match as a contest but power went off,” Mandigora said.
“The match was going on very well with us having an advantage and we never expected what happened. Although we were leading, I cannot say we were totally safe but we will just wait for the next step from the authorities. We will accept whatever they will decide.”
Meanwhile, the congested calendar will see the Warriors play in the Cosafa Cup in May, the Under 23 will also take part in the Under 23 Championships the same month before the 2017 Africa Cup of Nations qualifiers in June.
The league also has the eight team-One Wallet Cup and the 16-team Chibuku Super Cup on the calendar for this year and is targeting a November 30 finish.Advertisement