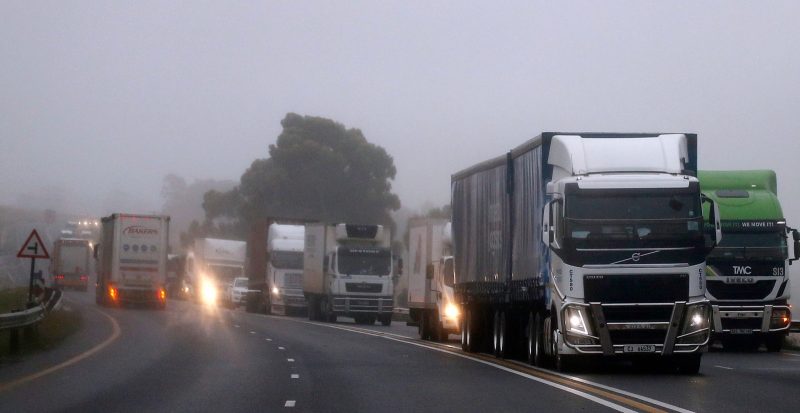 AS PART of its latest demands regarding the employment of foreigners in South Africa, the All Truck Drivers Forum (ATDF) wants the Zimbabwe Exemption Permit grace period, which expires on 31 December 2o22, to be abolished.

Groups of truck drivers marched through the streets of Pietermaritzburg and Johannesburg on Monday to hand over a memorandum of demands to the offices of the National Bargaining Council for the Road Freight and Logistics Industry.

The ATDF said its demand for the grace period to be abolished was in line with its stance on foreign truck drivers. The ATDF has been protesting with road shutdowns and highway blockades, calling for foreign truck drivers to be barred from the road freight industry, arguing that truck driving must be reserved for South Africans because it’s not a scarce skill.

“This is not a matter for the bargaining council but one that needs the urgent attention of [ministers] Nxesi and Motsoaledi,” said Nyathi.

In November 2021, Cabinet decided not to renew the Zimbabwean Exemption Permits. About 182,000 Zimbabweans hold the permit and were given 12 months to apply to migrate to other permit regimes suitable to their individual circumstances.

The decision to cancel the permit sparked outrage among holders and rights groups who unsuccessfully took the government to court on the matter. Some rights groups argued that it would not be possible for many current holders of the permit to successfully apply for other permits.

Defending the decision, Motsoaledi has said the non-renewal of the permits is beneficial to holders in the sense that the current permit regime does not grant applicants a chance to apply for other permits.

The ATDF has taken a hard line against hiring foreigners in the trucking industry, and its call is directed to both illegal and legal foreigners. The forum said it has always based its call on the argument that truck driving is not a scarce skill.

Section 19 (4) of the Immigration Act states that, subject to any prescribed requirements, a critical skills work visa may be issued to an individual possessing such skills or qualifications determined to be critical for South Africa.

The ATDF’s call for the Zimbabwe Exemption Permit grace period to be abolished coincided with the release of the draft National Labour Migration Policy.

Labour Minister Nxesi said the amendments to the Employment Services Act of 2024 aim to limit the number of foreigners who may be employed, and codifies the obligations of an employer engaging foreign workers.

The cancellation of the Zimbabwe Exemption Permit remains a thorny issue in South Africa as anti-foreigner sentiments grow. Other organisations, such as the controversial Operation Dudula and Put South Africa First, are also calling for foreign nationals to leave the country before the grace period ends.

The Department of Employment and Labour did not respond to a request for comment on the ATDFs demand. The department’s Sabelo Mali did not respond after seeing the message.

The demand to abolish the 12-month grace period was a collective decision, according to Nyathi. “I am only the secretary-general. We consult with the collective on every decision that we take and abolishing the grace period is no different.”