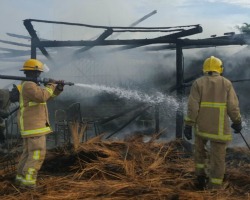 PROPERTY worth more than $30, 000 was destroyed by fire Saturday morning at the popular outdoor entertainment spot Pamuzinda Highway Escape situated along Bulawayo road.
According to the proprietor, Josh Hozheri, had it not been for the quick response by the Harare Fire Brigade, nothing would have been recovered.
The structure was built on thatch and poles only.
“The fire started at around 4 am in the morning. We suspect that one of the security guards was warming himself at the braaii stands and may have used plastic and paper as a catalyst to get more fire,” said Hozheri.
“He (the guard) may have slept and as the wind was blowing, the thatched roof caught fire and spread quickly.”
Hozheri said he was unable to give the exact cost of the goods destroyed as evaluators were yet to move in but thought the cost could over $30, 000.
“Our fridges and those that belong to Delta Beverages were destroyed, including television sets, bar stools and chairs, tables, DSTV decoders, bottles of wines and whisky and beer lagers and public address system equipment.”
“This also includes stocks that were in the back storeroom worth thousands of dollars. And this is definitely going to affect our business and will take time to recover.”
He applauded the swift reaction by members of the fire brigade.
“The Harare fire fighters were here (Pamuzinda) within less than 10 minutes and they managed to put off the fire and saved most of our property and stock,” he said.Advertisement