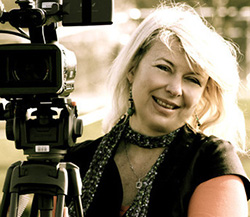 A NEW book looks at the challenges of working in Zimbabwe faced by a British film-maker and academic who was recently nominated for nine awards at the country’s International Film Festival.
Agnieszka Piotrowska, reader in film theory and practice at the University of Bedfordshire, was invited to Zimbabwe by the British Council in 2010-11 to organise workshops for local artists. She then secured a research grant for a 30-minute documentary about the 2011 Harare International Festival of the Arts – The Engagement Party in Harare (2013) – which attracted much criticism from the country’s white community when a Canadian interviewee in the film described Zimbabwe as “like 1950s Alabama”.
Further controversy greeted Dr Piotrowska in Zimbabwe when she used a grant from Bedfordshire to direct a play called Lovers in Time, a comedy about a female spirit medium who was executed by the British for leading a rebellion in the 1890s. She later made a documentary about her experiences, titled Lovers in Time – or How We Didn’t Get Arrested in Harare.
Since then, Dr Piotrowska has continued to work in Zimbabwe, directing two short films about the lives of contemporary women and two more about the illicit love affair in the 1980s between Zimbabwean writer Dambudzo Marechera and Flora Veit-Wild, a married German scholar.
She has further explored the challenges she has encountered in the country in a new book, Black and White: Cinema, Politics and the Arts in Zimbabwe.
This examines the arts scene in Zimbabwe, a topic comparatively neglected by scholars since the 2000 Land Reform Act, which led to a widespread white exodus from the country.
But the book also draws directly on Dr Piotrowska’s own research as “a theatre practitioner and a film-maker, working with Zimbabwean artists on projects involving postcolonial identity, trauma and creative forms of recovery and resistance. The overarching question of the project is how a specific artistic community can deal with the challenge of Difference – meaning cultural and bodily difference, but also differences of opportunity and privilege – in circumstances of postcolonial melancholia.”Advertisement

In 2015, Dr Piotrowska set up a company in Zimbabwe called Thinking Films, with a view to creating “collaborative feature films”.
It was this, she told Times Higher Education, that led to her recently successful “film noir fairy tale”, Escape, inspired by classic Hollywood and the films of David Lynch, in which a mixed-race stranger, searching for the father he has never known, “arrives in town and immediately gets involved in a variety of mysterious things”. Witchcraft, murder and a deathbed confession add to the heady brew.
Directed by Dr Piotrowska and her long-time Zimbabwean collaborator Joe Njagu, Escape attracted such interest at the Zimbabwe International Film Festival earlier this year that the organisers had to hire another cinema to show it. Newspapers linked with Robert Mugabe’s Zanu PF party, which had savaged her work at the time of the Lovers in Time controversy, helped in the process of distributing the DVD.
Yet along with a standing ovation, Dr Piotrowska also reports “a massive controversy over sex scenes and the representation of female sexuality”, even though the scenes in question involve no nudity or even kissing. She remains convinced that collaborative projects and “talking across the Difference” in a country as troubled by racial tensions as Zimbabwe “can help move things forward, at least by a millimetre”.