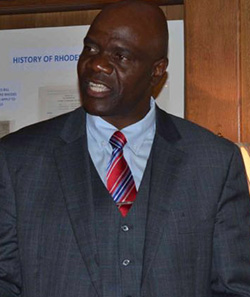 Adapted from the eulogy at the funeral of Susan Dangarembga by Professor Arthur G.O. Mutambara, Former Deputy Prime Minister of Zimbabwe

In 1947 she proceeded to Goromonzi High School – the first government secondary school established in Southern Rhodesia in 1946. She was in the second group of Form One students, which included her future husband – the great educationist and administrator, Hartzell High School Headmaster Mr Amon Dangarembga; the future distinguished lawyer and academic, University of Zimbabwe Vice Chancellor Professor Walter Kamba; and the future brilliant and revered physician Dr Davidson Sadza.
When they wrote the Cambridge Ordinary Level Examinations in 1950, Susan Ngonyama had the best results in the entire Southern Rhodesia, whites included. She outperformed Baba Dangarembga, Professor Kamba and Dr Sadza! Her unparalleled and unprecedented feat of outgunning the whites shocked and unsettled the racist settler regime of Southern Rhodesia. Through sheer brilliance and undiluted excellence, Susan demolished the myth of white supremacy.
The then Prime Minister of Southern Rhodesia, Sir Godfrey Huggins, took notice. He had to literally, albeit partially, concede defeat. He said, ‘Well, Susan Ngonyama’s results mean blacks and whites are intellectually equal. However, socially the whites are still superior!’ Obviously, Huggins was clutching at straws. How is that social supremacy measured?
Without firing a single shot, going to detention or organising political resistance, as a high school student in 1950 Susan Ngonyama scored a major victory for the freedom and liberation of Zimbabwe. She started the necessary process of transforming the minds of the oppressive whites, while mentally and intellectually empowering the oppressed majority, by giving them self-confidence and self-belief.
‘Yes, we are equally capable. Yes, we can do it. We are not at all inferior to the whites. If we can actually outperform the whites by their own standards, why can’t we rule ourselves?’ That was Susan’s subtle message in 1950 to the toiling black masses in Southern Rhodesia. Fellow Zimbabweans: That is vison. That is transformation. That is leadership.
In 1951, after Goromonzi, Susan proceeded to Fort Hare University where she joined a young Robert Mugabe – the future President of the Republic of Zimbabwe – who was already at the institution. They were together at Fort Hare for the 1951 academic year, after which Robert Mugabe graduated and left. In 1953 she became the first black woman in Southern Rhodesia to obtain a university degree – a Bachelor of Arts in English and Latin. Here was Susan scoring another first, empowering black Zimbabweans, in particular our women.
Fellow Zimbabweans, the struggle for gender justice, women’s rights and equality of the sexes started with Susan. For the feminists who wage an honourable struggle demanding equality between men and women, if you combine her 1950 and 1953 achievements, Susan is saying, ‘Do not aim that low, women are actually superior to men!’
What a visionary! She was a forerunner of what we now call womenomics – the economy as designed, experienced, driven and impacted by women. Current research has shown us that, in every measure, women are better managers and leaders than men. To my fellow male Zimbabweans, I am sorry to be the bearer of that bad news. Thank you, Susan for the vision, transformation and leadership.
Beyond Fort Hare, Susan – now married to Amon Dangarembga – went to the United Kingdom where she obtained a Master of Arts degree in English and a post-graduate Teaching and Education Administration diploma. Her journey in excellence never stopped. On her return in 1964, she settled at Hartzell High School teaching both Latin and English. In 1983 she became the first female Public Service Commissioner of an independent Zimbabwe. What a trailblazer!
The second way in which Susan Dangarembga provided vision, engendered transformation and nurtured leadership was through teaching. In every civilisation education is a key enabler. It is the driver of social progress. Susan was a great teacher, a distinguished teacher of teachers, an outstanding educationist. Having been the number one student in the entire country in 1950, she could have chosen a career as a lawyer, a doctor, an accountant or an engineer. She said, ‘No to all that, I want to be a teacher.’
Ladies and gentleman, the teaching profession is a noble profession. Teachers are a sacred lot. We are all products of teachers. Educators are the incubators and breeders of human capital, the cradle of leadership, and the source of vision. The odyssey of transformation begins with a solid educational foundation.
The third and final way that Susan Dangarembga provided transformative and visionary leadership was through the strength of her character. She exuded dignity, integrity, humility, hard work, self-awareness and empathy. That was Susan Dangarembga – the personification of both excellence and humility. Strength of character is the foundation of leadership. It fosters and sustains vision, while giving meaning and value to the content of transformation. As the old adage goes, ‘Watch your character, it becomes your destiny!’
Fellow Zimbabweans, as we mourn Susan Dangarembga, let us celebrate her life by embracing the legacy of her exemplary life: excellence, education and strength of character in pursuit of transformative and visionary leadership.
I thank you.