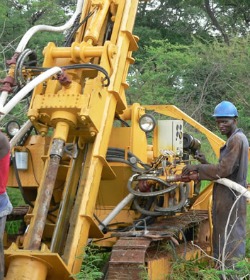 AFRICAN Consolidated Resouraces (ACR) has revealed it was at an advanced phase of negotiations with potential funders of the low cost Pickstone-Peerless gold mine as it unveiled the results of the definitive feasibility study (DFS) for the project.
The study reveals the robust economics of the operation, which will generate earnings before tax and depreciation of US$26 million after three years and US$54.8 million after six. This assumes gold prices of US$1,250 and US$1,350 in 2014 and 2015 respectively and US$1,500 an ounce thereafter.
The DFS ascribes a net present value to this, the first phase of the Pickstone project, of US$17.7mln at a 10% discount rate, while the initial funding requirement is put at US$15.7mln.
The all-important cash costs are US$742 an ounce, or an all-in US$886 including royalties and tax.
AFCR’s chief executive, Craig Hutton, said: “The completion of this DFS on time and on budget represents a significant achievement in the transformation of AFCR from an exploration company to a mining company.
“I should like to emphasise that the DFS relates to the oxide cap only, just one component of the much larger Pickstone-Peerless Gold project, and will support the funding of the much larger and higher grade sulphide ore outlined in the preliminary economic assessment.
“Restricting phase one to the oxide cap reduces the capex that would otherwise be necessary and enables us to use plant facilities already in place.
“We have increased the funding requirement for phase one principally to stockpile ore for four months to maximise early grade.”
The initial plan is to focus on the oxide cap of the 3.2mln ounce resource in order to generate near-term cash flow at low capital cost.
The results were based on a maiden reserve of 136,000 ounces, just 17% of the mining inventory.
However, the plan eventually is to develop a far bigger mining operation targeting one million ounces.
In the meantime, phase one remains on track for first production of gold in June next year.
At the same time work on the pre-feasibility study for the more ambitious second phase is in progress. This study is expected to be complete in September or October 2013.Advertisement