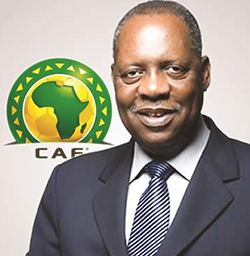 ACTING Fifa president Issa Hayatou says he is confident Phillip Chiyangwa’s election as Zifa president on Saturday will benefit Zimbabwe football.
Chiyangwa joined world football leaders after winning the battle to succeed Cuthbert Dube who was jettisoned by his fellow councillors on October 3.
“CAF is confident that your experience, know-how, and leadership will benefit football in Zimbabwe and allow its durable development,” Hayatou wrote to Zifa on Sunday, 24 hours after Chiyangwa’s ascendancy to power.
Chiyangwa, a Zanu PF central committee member, polled 40 votes beating his closest rival Trevor David Juul who got 13 votes while Leslie Gwindi and James Takavada garnered 2 and 1 vote respectively.
Omega Sibanda was elected vice president after polling 34 votes with Lincoln Mutasa only managing 23 votes.
Sibanda was the vice president of the association during Dube’s second stint in office, but was suspended for plotting to oust his boss.
The other four members of the Executive committee elected include Central Region chairperson Felton Kamambo, former Warriors winger and football intermediary Edzai Kasinauyo, Eastern Region chairman Piraishe Mabhena and women football side Conduit Academy owner Philemon Machana.
The man who was behind Dube’s ouster in October, Southern Region chairman Musa Mandaza lost in the election and is facing a revolt from his own region who also want to ‘revoke his mandate.’
Premiership against Chiyangwa?
The two other slots on the new board, which will be in office until March 2018, will be filled by Premier Soccer League chairman Twine Phiri and acting Zimbabwe Women Football League boss Elizabeth Langa. Langa replaced the suspended Mirriam Sibanda.
A total of 57 councillors took part in the elections instead of 58 with Premier Soccer League club Harare City not attending.
While the voting patterns were not immediately clear, sources who attended the Saturday event pointed out that the 15 PSL representatives in attendance did not vote for both Chiyangwa and Omega Sibanda, his new deputy.
“The PSL clubs wanted Twine Phiri to be the Zifa president, but Phiri was elbowed out by Farai Jere on the pretext that he (Jere) would contest before making a sudden U-turn and campaigning for Chiyangwa.Advertisement

“Oms (Omega) is unwanted in Zimbabwe football. He fights everybody, Highlanders, Dynamos, Platinum and even Hwange through some players he claims to represent.
“The councillors wanted Elkanah Dube, but we hear he was paid off not to contest and withdrew at the last minute,” a source said.
Chiyangwa’s immediate task is to ensure the locally based Warriors squad of adequate camping time and resources for their participation in the 2016 African Nations Championships (Chan) finals that will take place in Rwanda next month.
This will be followed by the Mighty Warriors historic appearance in the Rio Olympic Games in June, in addition to the senior men’s 2017 Africa Cup of Nations qualifiers that will resume next March.