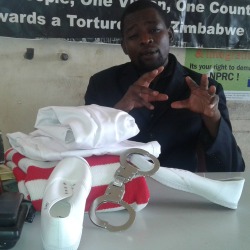 KWEKWE: Human rights defender, Emmanuel Nkosilathi Moyo, who, last year, made headlines for sending President Robert Mugabe prison garb for alleged abuses, has released a song blasting his wife (Grace) for saying the corpse of the 93 year old leader could win elections.
Grace recently told a Zanu PF rally in Buhera that even if Mugabe was to die, people would still vote for his corpse.
In the debut song, ‘Musadherere Povo’, Moyo took a swipe at the First Lady for her claim, saying it was an insult to citizens.
“Musadherere povo ndati amai musadaro……makati chitunha chavo ndicho chichatonga, vapenyu varipo, matishoreiko amai musadherere povo’, Moyo opens her song. Loosely translated, the song says Grace should not take people for granted by suggesting that her husband could rule from the grave.
“I composed this song after listening to Grace Mugabe’s rally in Buhera where she said her husband would continue ruling this country even if he was a corpse,” said Moyo.
He added, “The song also highlights that Grace should not continuously insult her colleagues in Zanu PF like Vice President Emmerson Mnangagwa as doing so might lead to serious fights, which are counterproductive to the country.
I also make it clear that Mugabe once lost presidential elections to MDC-T leader Morgan Tsvangirai and, so, he is not invincible.”
Released this week, the song is already available on YouTube.
In January this year, Moyo released another song in which he implored Reserve Bank of Zimbabwe governor, John Mangudya, to respect people and not pretend bond notes were money.Advertisement