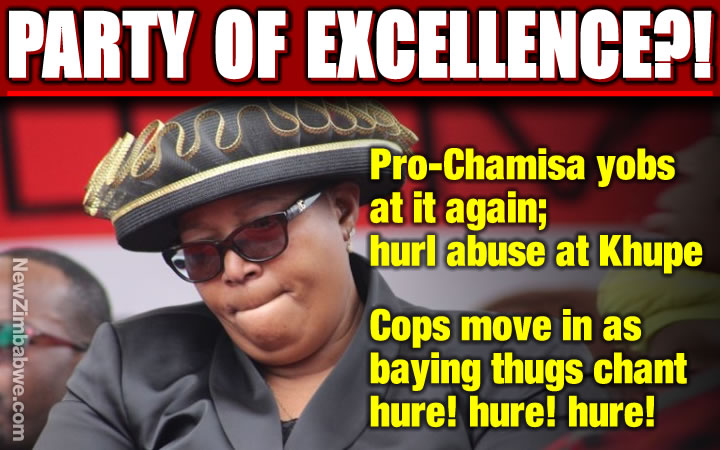 Khupe had been at the court attending a case in which she is battling Chamisa over the use of the party’s name and symbols.

The two former allies fell out over the succession to founding MDC-T leader Morgan Tsvangirai who succumbed to cancer in February this year.

As Khupe left the hearing, activists in MDC-T regalia who had been singing outside the court room, charged at the former deputy prime minister.

They scorned her for being a “sell-out” and chanted “hure! hure! hure!” which is Shona for prostitute.

Riot police swiftly moved in to protect the former deputy prime minister as she tried to get to her vehicle.

Khupe kept her cool and simply smiled as the abuse was hurled at her.

One of the activists shouted; “This party belongs to the people. Khupe you want to personalize MDC-T party. It does not belong to you. You should thank the police otherwise we could have dealt with you thoroughly.

“We are tired of poverty. We are tired of your fights. Please, sort out your differences (Khupe and Chamisa) for the sake of the people of this country. We do not want to continue with this suffering!”

“We condemn the violent attacks on our president and all our party members today,” said national spokesperson Linda Masarira.

“The culture of violence and intolerance being exhibited by the Chamisa camp should stop forthwith.

“We have been advocating for a peaceful election, period; and it’s rather unfortunate that, the Chamisa camp decided to bus vulnerable supporters to humiliate, insult and throw stones at President Thokozani Khupe and our vehicles at the Supreme Court.”

She added; “Our ideal Zimbabwe is a transformative developmental democratic state which respects and protects the constitution. No one has a monopoly on leadership in Zimbabwe.

“President Thokozani Khupe is a mother, former deputy prime minister who should be respected and appreciated for her role in the democratization agenda in Zimbabwe.

“We will not allow the struggle to be hijacked by a … mimmicry of ZanuPF pretentiously clothed as a progressive Democratic institution led by Chamisa. We will wait for the courts to determine the legitimacy issue in the MDC-T.”