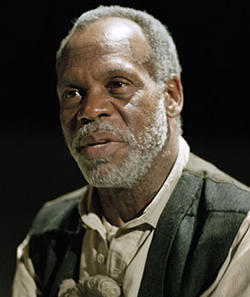 US actor Danny Glover said Thursday that he is in Nigeria to star in a movie based on people who risked and sacrificed their lives to stop the spread of Ebola in Africa’s most populous country.
Glover said he is proud to take part in the film, called “93 Days,” because of the achievements made by the real-life characters. Nigerian actress Bimbo Akintola will portray Dr. Stella Ameyo Adadevoh, who along with her team diagnosed the first Ebola case in Nigeria.
Adadevoh put the patient under quarantine, and stubbornly refused to discharge the Liberian man who was sick with the infection despite pressure.
Adadevoh eventually died along with three other hospital staff that had contracted the disease. Her actions ensured that the fast-spreading viral infection was quickly contained.
Glover will portray the director of the hospital where Adadevoh worked.
Akintola said the movie is a story of how Nigeria— a country where many institutions have weakened due to endemic corruption and ethnic strife — triumphed over the spread of Ebola, which ravaged her West African neighbours of Guinea, Sierra-Leone and Liberia
“Nigerians acted as one. There was nothing about you being from different ethnicity or different political party, it was about Nigerians just standing up and doing this incredible thing for Nigeria,” Akintola said.
She said the movie will be about courage in the face of death.
“The doctors at First Consult (hospital) didn’t ask for an Ebola patient. They weren’t expecting it. But they stood up to the plate when it turned out the patient had Ebola. No one run away. That is courage in the face of death,” Akintola said.
About 12,000 people fly out of Nigeria daily to different corners of the globe, Akintola said, adding that an Ebola outbreak in Nigeria would have had a devastating effect on the world.
According to the World Health Organization, news of the first Ebola case in Nigeria on July 23 last year rocked public health communities all around the world.
“Nigeria is Africa’s most populous country and its newest economic powerhouse. For a disease outbreak, it is also a powder keg.
“The number of people living in Lagos — around 21 million — is almost as large as the populations of Guinea, Liberia and Sierra Leone combined,” WHO said last year in a publication about the outbreak.Advertisement

Lagos also is characterised by a large population living in crowded and unsanitary conditions in many slums, it said.
Thousands of people move in and out of Lagos, Africa’s largest city, every day, constantly looking for work or markets for their products in a busy metropolis with frequent traffic gridlocks, said WHO, adding that officials were worried how they would manage to trace people who had come into contact with persons infected with Ebola in order place them in isolation.
“The last thing anyone in the world wants to hear is the two words, ‘Ebola’ and ‘Lagos’ in the same sentence,” said WHO, quoting Jeffrey Hawkins, the United States Consul General in Nigeria at the time.