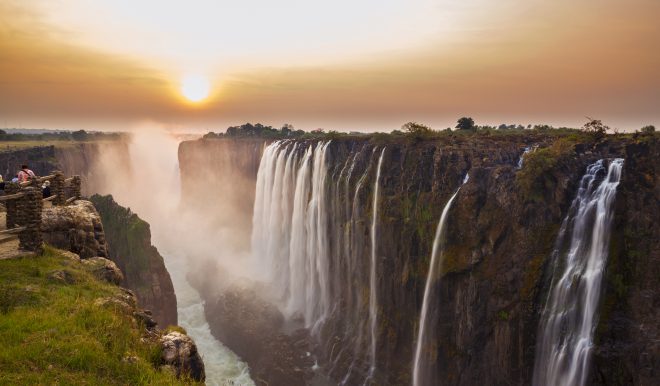 IN THE local Lozi language they call it Mosi-oa-Tunya, “The Smoke That Thunders,” but by the end of 2019, Victoria Falls’ thunder was more like a dripping trickle.

Africa’s largest waterfall has been a victim of the region’s droughts, and Zimbabwe, which borders its banks, is suffering too.

More frequent, intense and unpredictable droughts have robbed the country’s residents and farmers of sufficient, clean and fresh water — impacting food security and threatening the livelihoods of 45% of the country’s rural population.

Urban areas have been affected too. Heavily reliant on hydropower as a source of electricity, prolonged droughts have crippled Zimbabwe’s energy grids, leaving towns and cities with frequent power shortages and cuts.

Through its technical cooperation programme, the IAEA in collaboration with the University of Zimbabwe, Zimbabwe’s National Water Authority and Environmental Management Agency and the Helmholtz Centre for Environmental Research, is seeking to reveal how groundwater and river systems within the country interact using isotope hydrology.

Their findings will help the country better manage its freshwater resources, cope with water pollution, and ensure safe water supply to the country’s population.

“Most of Zimbabwe’s rain falls between November and March, the rest of the year is a very long dry season. And recently, good rains have only come in two out of every five years,” said Alexander Mhizha, former Chairman of the Department of Civil Engineering at the University of Zimbabwe.

“Therefore, we increasingly have to rely on groundwater, but there is limited knowledge on aquifer recharge areas and rates. Training our scientists and strengthening laboratories are key to better managing our water supplies.”

The IAEA’s regional and national projects focus on training and supporting partnerships within the country, said Anna Grigoryan, the IAEA’s technical cooperation Programme Management Officer for Zimbabwe: “By a coordinating drought response between water stakeholders, Zimbabwean decision-makers can make knowledgeable choices and promote sustainable management of the country’s water supply.”

The need for quality water

A water shortage from droughts is not the only problem; a lack of clean water is a growing issue.

River water is susceptible to contamination and is open to many types of pollutants. “If the river is contaminated, the contamination will automatically flow through to the groundwater.

“By using stable isotopes of oxygen and hydrogen and naturally occurring radioactive isotopes such as tritium and radon-222 to trace water, we can better understand the complex dynamics of river and groundwater systems,” he said. This allows scientists to understand which water body is contaminated and how to replenish it.

Both river and groundwater are important in providing clean water for drinking, urban, and agricultural use within the Save Ctachment — the focus area of the IAEA project.

Located in the eastern part of Zimbabwe, the catchment receives limited rainfall during its dry season, leaving it prone to drought. With a growing population and an economy reliant on agriculture, the demand for water in the catchment area is growing.

To better understand the relationship between river water and groundwater, counterparts from the University of Zimbabwe received training in 2018 at Addis Ababa University in Ethiopia, and at the end of that year, Mhizha learned at the IAEA laboratories in Vienna, how to evaluate geological, hydro-chemical and hydrological data, and design a field sampling campaign for the study sites.

In June 2021 experts from the Helmholtz Centre in Leipzig, Germany, conducted a five-day virtual training course with local experts.

They were instructed in the basic principles of isotope hydrology with special emphasis on the use of stable and radioactive tracers as tools to investigate surface water-groundwater interactions; groundwater dating techniques; and the vulnerability of aquifers to contamination.

This online training will be followed with an in-person expert visit to the country by the end of the year, to further train Zimbabwean experts on sampling and analytical techniques, interpretation of results, and in using specialised laboratory equipment. Local scientists will then be able to independently continue isotopic analysis over several seasons to generate data and understand interactions between the different components of the water cycle.

“The isotopic results found by local researchers will help identify the challenges Zimbabwe’s national groundwater management system needs to tackle and, in turn, enable more sustainable management of the country’s water supply,” said Michael Schubert, a mineralogist at the Centre in Leipzig and one of the trainers of the course.

This information informs water specialists on the nature, history and flow of sampled river and groundwater and helps them calibrate and improve numerical models that predict the response of rivers and aquifers to abstractions and climate change.