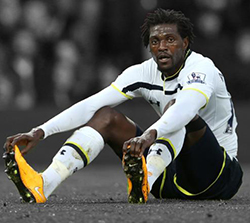 EMMANUEL Adebayor has called Lyon’s reasons for not signing him “nonsense” and said “they will kill themselves” if they use that kind of “ridiculous excuse” not to sign players.
Adebayor, 32, was expected to complete a move to the Ligue 1 side as a free agent, but Lyon pulled out of the deal citing his participation in the African Nations Cup with Togo and his ineligibility for the Champions League, something that has upset the former Arsenal, Manchester City and Tottenham Hotspur striker.
“They said that? That’s nonsense,” he told L’Equipe. “They came to me after we had qualified [for the African Nations Cup], so they knew I was going to play. If they start looking for such excuses, they will kill themselves. I’m the captain of my country, so how could I not go? What if a Frenchman refused to play in the Euros?
“OL spoke to Claude Le Roy, my coach with Togo, and they didn’t ask for special treatment. This was absolutely never a reason there was no deal.
“I found out [the move was off] on Saturday morning. Claude Le Roy told me he had seen it in L’Equipe. I called my agent who more or less confirmed it to me. Terms were agreed on Tuesday. Lyon wanted to send me a private jet to Lome [the capital of Togo].
“I couldn’t leave the same evening because Lome is not Paris — there are not flights every 30 minutes. I had things to sort on Wednesday too. So I arrived on Friday morning at 10:30 to speak to the coach. I thought it was just a medical then to sign. Even if I wasn’t in the squad, I would have gone to Marseille to support the team and see how they play.
“The coach asked me surprising questions. He wanted to know if I was married, if I had a kid. But all he needed to do was look online. He asked me how I would speak to the young players in case they were struggling, in which role I saw myself. This is how I know there was not already an agreement on a contract.
“I’ve been playing at the highest level for 15 years and I have worked with some of the best coaches in the world — [Arsene] Wenger, [Jose] Mourinho, [Didier] Deschamps, [Roberto] Mancini.
“He asked me why it didn’t work at Crystal Palace. I told him that I’ve always played for teams aiming for the English title or a European title. It’s the first time I’ve been in a team battling relegation and the play didn’t suit me.Advertisement

“What’s more, he’s scared of Florian Maurice [Lyon’s director of recruitment]. I asked to see around the ground to soak up the atmosphere but he said he’d have to speak to Florian. Imagine Wenger asking someone if he could give me a tour of the Arsenal training centre.
“I think the Champions League win against [Dinamo] Zagreb changed things. There’s a little disappointment obviously because I really liked Lyon, like I said to the coach. If they didn’t want me, why did they make a ridiculous excuse?
“But I’m stronger than that in my head. I could have died in 2010, so nothing can touch me today. I will move onto something else, even if this was a really funny chapter.”